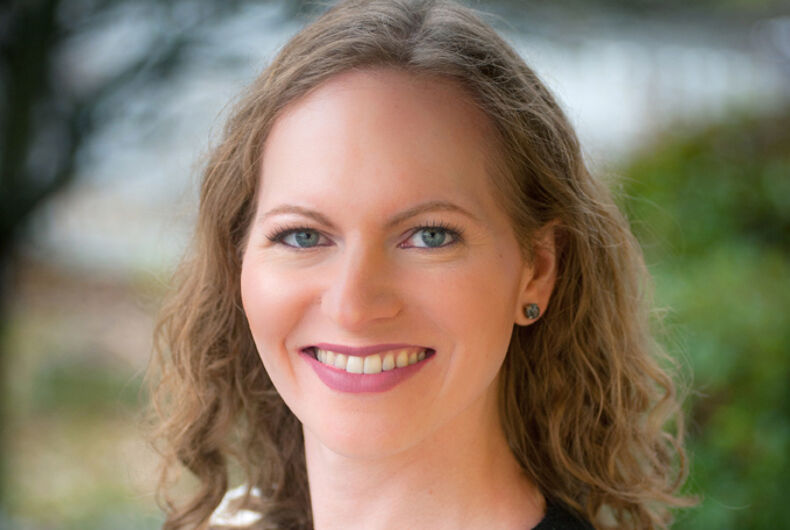 Alexandra Chandler is seeking to replace Massachusetts’ Representative Niki Tsongas, who is setting down – and a win for her would make her the only known trans woman to be elected for Congress.

With her primary coming up this Tuesday, we got a moment to sit down with Alexandra Chandler and find out how being an out trans woman running for high office has played a part in her campaign, and what she brings to the table if elected.

Thank you for taking some time to visit with us today. First and foremost, we’d like to find out a bit more about you, and what motivated you to run at this time?

For me it’s a critical moment for our country and for the world, when our home districts member of Congress Niki Tsongas announced her retirement, I came to the realization that I had the professional experience, the subject matter expertise, and the lived experience that would make me be best candidate to get things done in Congress for ordinary people and to protect our democracy.

The reason I believe that is that on a professional level I served 13 years in the intelligence community. I joined after 9/11 and I worked under the Bush, Obama, and Trump administration on problems like Weapons of Mass Destruction Proliferation and stopping weapons going to terrorist groups in a conflict zone problems that require you to work across divisions work with Republicans, Democrats, with people across government, with other governments to get things done. That sort of skill set is what we desperately need in Congress. That’s the professional experience.

Subject matter experience, I am the only candidate in our race with career national security expertise, and I believe that a Russian speaking Law School graduate and intelligence community leader is something that we could very much use in Congress today.

Then finally lived experience, I am a middle class Mom of two, with one sone in day care, and the day care costs to show for it, and the other son in public school. I am someone who dealt with a dad who struggled with addiction. I lost him when I was 17 and it makes my intention to bring a progressive agenda that really helps ordinary people and is informed by the experience of an ordinary person like me in congress.

Unlike some recent trans candidates like Danica Roem and Christine Hallquist, you’ve opted to put trans issues in the forefront, such as in your “Alexandra Chandler: running for Congress for you, #WhoeverYouAre” advertisement. How do you feel this has affected your campaign – or has it affected it at all?

What I’ll say is a the reason why I highlighted trans kids and the issues of trans people in a recent ad is that in Massachusetts we have the unique issue of anti-discrimination protections for trans people being on the ballot, and the outcome is in doubt according to the polling, and much as people would say, “Oh my goodness as a trans person who is running for office, you can’t talk about trans issues.”

Well my responses is, I’m gonna speak out to the vulnerable whoever they are when they need someone to speak for them. The rights of a vulnerable population on the ballot in my state. If I don’t speak out to them as a first openly trans candidate for Congress in Massachusetts then who will. I’m not going to create space for others not to speak.

Recently on Fox news, when speaking about Christine Hallquist’s campaign in Vermont, Chadwick Moore and Tucker Carlson said that “transgender privilege” was behind her win. What’s your reaction to those, like them, who might think you’re going going to win for some sort of “affirmative action” reason.

I will say is that if I win this election – and I do hope to do so on September 4th and November 6th – it will be because we have had a clear and progressive message that we’ve given to the voters, and they’re responding to it. We are in a race of 10 candidates where people say, “how can one distinguish oneself?”

What I like to say is that we have the most progressive platform in the race that we put out early on in great detail, that I’ve been speaking with great clarity about how I will get things done, and how I will pay for them. We have an optimistic, we have been positive. We have built a coalition that includes not only progressives but even Republican-leaning independents who respect my background of service, and a coalition that universally respect the fact that in the most expensive congressional primary in Massachusetts history, we have the lowest median donation rate at twenty seven dollars, and that is something where people can look at our campaign and say, “Wow, you’re going to actually follow through on your promises. You are not beholden to big money or lobbyists. You’re just beholden to the voters.”.

So I will say I have the privilege of the backing of the working middle class of Massachusetts 3rd District, and if I win it’s going to be because of that.

Over the last couple election cycles, we’ve really seen an increase in trans  people running for office. What do you see fueling such a movement?

I believe that when a community is under attack, whether it’s the transgender community, or people of color, or women who have all of them stepping up and running for office and record numbers. I think the natural response is to stand up and fight back in the most productive way possible and that is to get involved in the process, and for many to run for office. I think that’s what we’re seeing here.

Beyond anything related to trans issues, what do you see as some of your biggest challenges in this election?

In this election the biggest challenge is the role of money in politics, which in our race there’s a number of campaigns that are mostly financed – mostly – by writing checks of two thousand dollars and above, and by corporate PAC money.

We are taking the exact opposite approach which, on one hand it leaves us with fewer resources, but on the other hand it means that we’ve drawn from strength an army of volunteers. We have postcarding efforts and remote phonebanking, as well as the traditional means of voter contact, and it is allowing us to get our message out. The number of voters and to win. But it is a challenge, I’ll be free to admit that, but it is a challenge that I have turned into something that I own, and that I alone in our field of Democrats who are obstensively progressive I alone have said I will introduce legislation to overturn Citizens United to promote publicly-funded elections on pain of resignation from Congress. If I do not do so within one year of election. I’ve signed on to an initiative called the Candidate With A Contract Initiative which is a nationwide network of candidates who are ready to take that ultimate step – and by this I’ve turned weakness into strength.

What issues are near and dear to you, that you really hope to champion in Congress?

That’s why I have plans to address both sides of that equation. The radical expansion the earned income tax credit, expanding profit sharing programs to push wages up finally again, and then on the cost side of the equation: to cap childcare costs at 10% of income, to move us to a single payer health system, because having worked in community healthcare I know that we’re not going to make the real change in the cost structure of healthcare in this country until you remove all the middlemen and the profit motive.

I have a number of steps on the way to that, that will also help the issue. Those are gonna be my number one priorities I get to Congress.

Helping ordinary people – that’s what the campaign’s about.

We wish Alexandra Chandler the best of luck in her primary run as well as November.