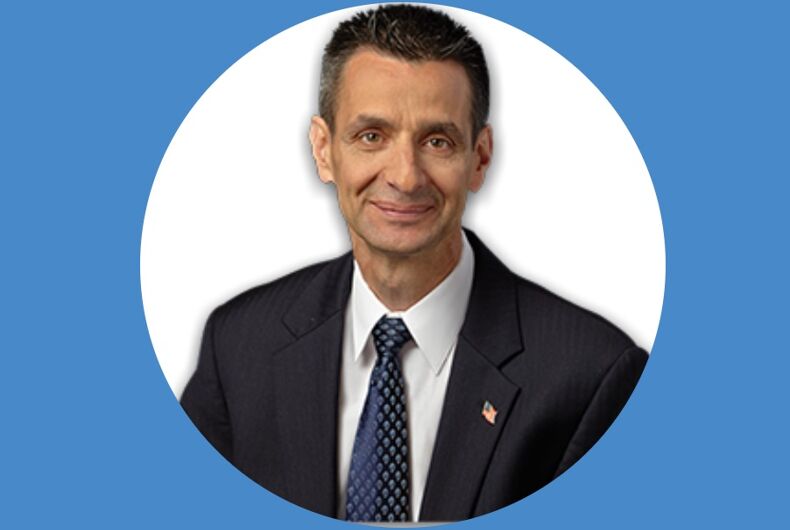 Chicago Alderman Nick Sposato has multiple sclerosis and uses a wheelchair. He says that after consultation with his doctor, he’s not comfortable getting the COVID vaccine.

The Democrat-turned-Independent politician reposts vaccination site information on his social media, but during a recent interview with the local NPR station, he repeated anti-vaxxer talking points before making an even more outlandish claim.

He says he “identifies as a vaccinated person.”

“You can identify as whatever you want these days, can’t you? I identify as a vaccinated person,” he told the station before explaining why he was one of the few city aldermen not to be vaccinated.

This is part of a long pattern of people misconstruing the concept of gender identity as simply stating that a person is whatever they want to be – often just to win an argument or get some material benefit – instead of expressing a deep sense of one’s own reality and living as a person’s authentic self.

This misconstrued version of gender identity – that it’s a fiction or even a lie used for personal gain – has been behind many of the attacks on transgender youth this year. Republican lawmakers all over the country are arguing that laws are needed to stop cisgender boys from pretending to be transgender girls in order to win at sports, something they can’t name a single example of.

The evidence reviewed by the National Multiple Sclerosis Society shows that having MS does not make someone more likely to develop COVID-19 or die than the general population. Men and people over the age of 60 with MS are more susceptible to having a severe case of COVID-19, however, and Sposato is 62.

As the dangerous Delta variant spreads rapidly throughout the country, politicians and celebrities are being urged to encourage their followers to get vaccinated. Sposato’s callous comment comparing vaccinations to transgender people came in response to NPR’s look into local politicians who had been vaccinated.

Mask mandates are being put back into place nationwide for both vaccinated and unvaccinated people in an attempt to stem the spread. Anti-vaxxers have used contradictory information from the federal and state governments along with GOP efforts to undermine prevention measures to cause scenes, start fights, and delay flights.

Businesses and other places where people congregate indoors often don’t have a way to tell who is vaccinated and who isn’t, and establishments are starting to implement an honor system if local regulations aren’t already in force.

But some Americans don’t want to get the vaccine, and they tend to be rural Republicans and white Evangelicals. That is, they’re the same people whose representatives are pushing anti-transgender legislation all over the country.

Two zip codes in Sposato’s ward have lower vaccination rates than the rest of the city.

Sposato also told the station that he had created a fake vaccine card for himself that he downloaded online, but says it was just a joke and he’s never used it.

The one joke, COVID-19 edition. https://t.co/RQ7lhPRpRT