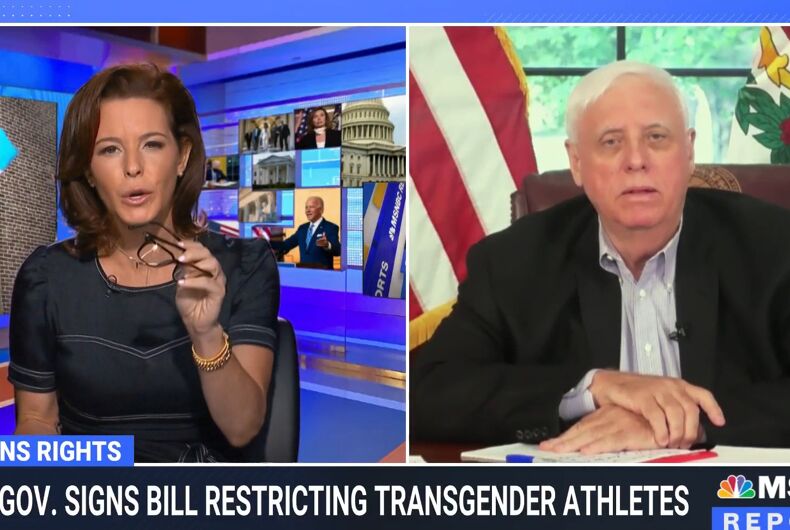 Sephanie Ruhle was having none of Gov. Jim Justice's excusesPhoto: Screenshot/MSNBC

MSNBC host Stephanie Ruhle chewed out West Virginia Gov. Jim Justice (R) for signing a bill to ban transgender girls from school sports after he couldn’t even say whether there’s even one trans student competing in sports in his state.

“Sir, you have no examples of this happening,” she said as she berated the governor. “Why would you take your time to do this?”

By the end of the segment, Justice was barely coherent, saying that there are only “12 kids maybe in our state that are transgender-type kids.”

Earlier this week, Gov. Justice signed a bill that would ban transgender girls and women from participating in school sports as their gender. All over the country, Republican state lawmakers are trying to pass similar legislation, using the exact same talking points about how transgender girls are crowding cisgender girls out of school sports even though they can’t even say if there are any trans student-athletes in their states at all.

“Can you name one example of a transgender child trying to gain an unfair competitive advantage at a school there in West Virginia?” Ruhle asked.

“Well… well Stephanie, I don’t have that experience exactly to myself right now, but I will tell you this-” Justice started responding before Ruhle cut him off.

“Not yourself. Your state, sir. Can you give me one example of a transgender child trying to get an unfair advantage? Just one in your state,” she asked again.

“No, I can’t really tell you one, but I can tell  you this Stephanie,” Justice said before rambling about how “we all know what an absolute advantage boys would have playing against girls….”

Of course, the law isn’t about boys playing girls’ sports, it’s about banning some girls – those who are transgender – from playing girls’ sports.  Justice tried to talk about why he, as a girls’ basketball coach, thinks it would be bad for boys to pretend to be trans in order to participate in girls’ sports – which is absurd – and Ruhle wasn’t having it.

“But, sir, you have no examples of this happening,” she snapped back. “Why would you take your time to do this?”

Then she dragged the state of West Virginia, pointing out that it’s ranked “45th in education, 47th in health care, 48th on the economy, and 50th in infrastructure.”

“If you cannot name one single example for me of a child doing this, why would you make this a priority? I just named four things that would seem to me like a much bigger priority,” Ruhle scolded the governor.

Looking like a child caught with his hand in a cookie jar, he responded, “Well Stephanie, I didn’t make it a priority.”

“You signed it!” she said, incredulously. He brought up Title IX to defend his position when that’s the exact law that President Joe Biden cited to back up the administration’s position that discrimination against LGBTQ people in education – including school sports – is already illegal.

“I think we only have 12 kids maybe in our state that are transgender-type kids, for cryin’ out loud, Stephanie!” the governor said, not citing a source for that number.

“Please come back when – beyond anecdotal feelings as a coach – you can show me evidence that those young women are being disadvantaged in your state,” Ruhle responded.

The ACLU has already said that it will sue West Virginia over the law.