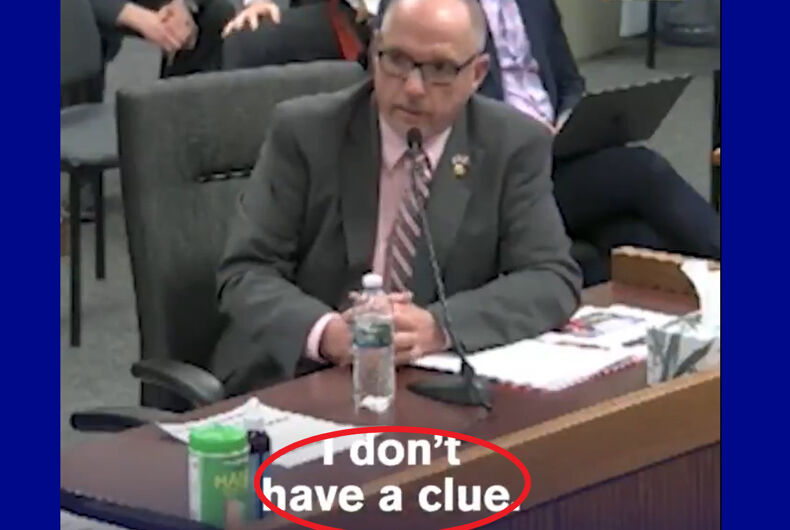 Missouri lawmaker who didn't do his homework before introducing an anti-trans billPhoto: Screenshot/HRC

HRC just released a damning video that shows just how little Republican lawmakers know about transgender youth as they try to ban them from playing school sports.

Just this week, a North Carolina Republican introduced a bill that would ban transgender girls and women from playing school and college sports, the 29th state where this has happened in just this year.

Related: National hate group could be behind the bills in 20+ states attacking transgender youth

One of the bill’s sponsors, Rep. Mark Brody (R), echoed Republicans in other states in insisting that the bill is needed because cisgender girls and women are “pushed out of female sports, and all of their records are broken, scholarships lost and benefits of excelling are diminishing before this is addressed.”

The AP says that Brody “acknowledged that he knew of no such incidents in North Carolina,” which is surprisingly common this year. Many Republican lawmakers are introducing these bills and saying that girls’ and women’s sports are being destroyed but can’t even think of a single example of a trans girl who won any sport in their state, much droves of trans girls who are forcing cis girls out.

HRC compiled video of Republican lawmakers being asked about this in states like Georgia, South Carolina, Tennessee, Arizona… and they can’t state a single example of it happening.

“I don’t have a clue,” said one Missouri lawmaker in the clip who was asked about how many trans kids are playing in school sports in the state.

Everything you need to know about anti-trans sports bills in 40 seconds. pic.twitter.com/EwVfpcnWeX