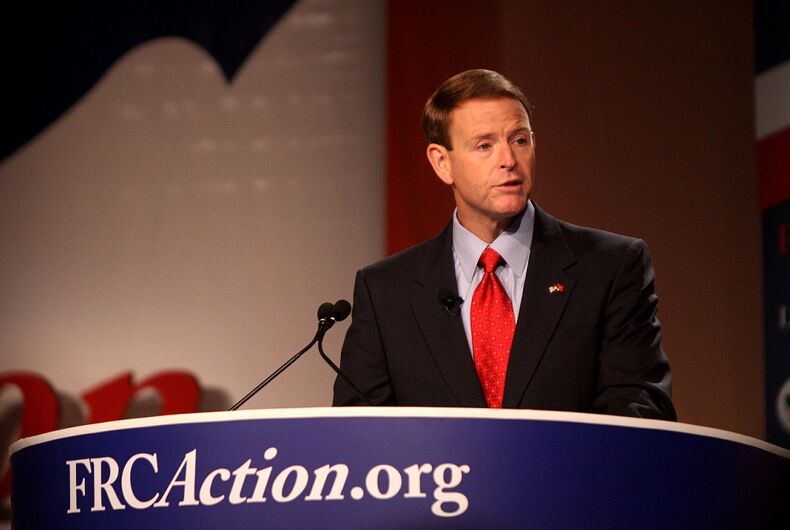 Patrick is seeking Christian support for Senate Bill 6, which would restrict bathroom usage to the bathroom associated with the sex indicated on someone’s birth certificate. The bill also prevents local governments from passing laws that ban discrimination on the basis of gender identity.

Supporters of the bill have repeatedly said that Senate Bill 6 has nothing to do with discriminating against transgender people, and a spokesperson for Patrick said that it’s “a public safety and privacy bill.”

Patrick launched Operation One Million Voices, a series of summits to get conservatives to speak in support of the bill. The effort is being led by the Family Research Council and Vision America, two groups with a long history of anti-LGBT rhetoric.

The FRC supports conversion therapy for transgender people on their website, arguing that being trans is a form of “grief, discomfort, and anger” that is best resolved through counseling. FRC president Tony Perkins likened allowing children to be near a transgender person to “child abuse.”

Rick Scarborough, founder of Vision America, once said that HIV/AIDS was God’s “judgement” for the “homosexual disease.” He has also said that employment discrimination against transgender people was a mere “inconvenience” to “cross-dressing, gender-confused adults.”

Patrick is sticking to his claim that Senate Bill 6 has nothing to do with transgender people, referring to past transphobic statements by the FRC and Vision America as a “position on other issues.”

The supporters of Senate Bill 6 haven’t shied away from talking about transgender people, though. Republican state senator and Senate Bill 6 sponsor Lois Kolkhurst said, “Unless we act, those advancements might erode into a gender-fluid, what I might say, highly litigated position. If males can instantly be declared to be a female, then what becomes of female athletics, or women’s rights for that matter?”

Senate Bill 6 has already been passed by the State Affairs Committee in the senate in an 8-1 vote and is now headed to the full senate.