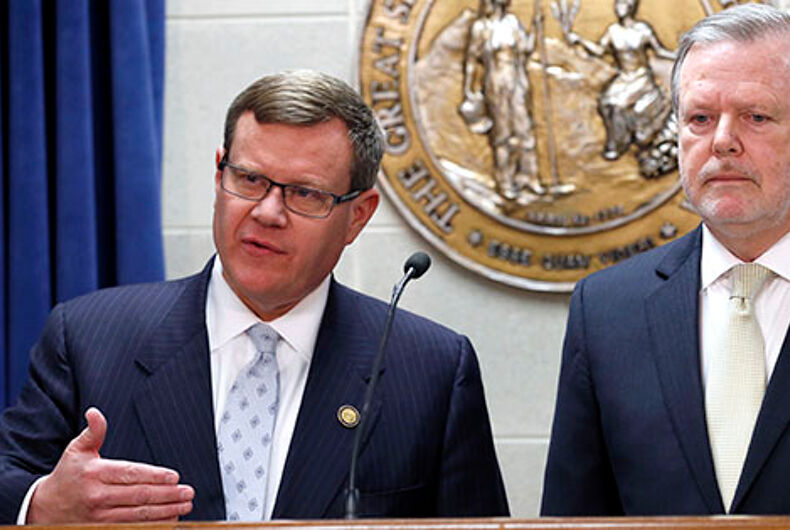 North Carolina Republican lawmakers said Wednesday night that they have an agreement with Democratic Gov. Roy Cooper on legislation to resolve a standoff over the state’s “bathroom bill.”

GOP leaders announced the new legislation would be debated and voted on Thursday. Details about the replacement weren’t immediately available, and House Speaker Tim Moore and Senate leader Phil Berger declined to take questions during a brief news conference.

It also was unclear whether there were enough House and Senate votes to pass it. The Republican announcement followed several hours of private meetings among lawmakers, and with Berger and Moore shuttling between their corner offices at the Legislative Building.

The late-night work came as the NCAA has said North Carolina sites won’t be considered for championship events from 2018 to 2022 “absent any change” in the March 2016 law known as House Bill 2, which it views as discrimination. The NCAA said decisions would be made starting this week on events. North Carolina cities, schools and other groups have offered more than 130 bids for such events.

The NCAA already removed championship events from the state this year because of the law, which limits LGBT nondiscrimination protections and requires transgender people to use public restrooms corresponding to the sex on their birth certificate.

The law already has prompted some businesses to halt expansions and entertainers and sports organizations to cancel or move events, including the NBA All-Star game in Charlotte. An Associated Press analysis this week found that HB2 already will cost the state more than $3.76 billion in lost business over a dozen years.

Leaders of national and state gay rights groups said Wednesday evening they only want legislation that completely repeals HB2 and does nothing else. They have complained about previous compromise proposals — that ultimately failed — because they said it kept discrimination on the books against LGBT people.

Wolves in the hen house: Look who Texas recruited to promote its bathroom bill