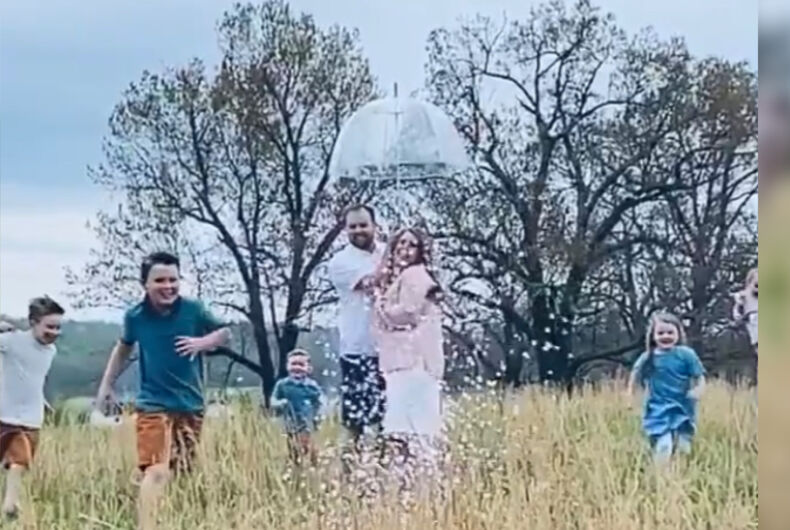 Josh Duggar, his wife, and his children celebrating the assumed sex of Duggar's seventh childPhoto: Screenshot/Twitter

But just days before, he and his pregnant wife, Anna, threw a gender reveal party for their upcoming seventh child. Josh’s siblings and several of their children attended. Duggar has previously admitted to sexually abusing one of his sisters.

Related: Father-to-be killed in a gender reveal explosion for his first child

Anna posted to Instagram that their family has welcomed “9 girl cousins in a row, and we are adding one more this fall.” She included a picture of the nine young girls, lined up next to one another.

Anna also wondered if Jessa Duggar Seewald will be “having a boy or girl.” Jessa was one of the siblings who Josh admitted to abusing, and she has co-starred in her own spin-off ever since TLC cancelled the Duggar family’s 19 Kids & Counting show due to Josh’s past abuse. She announced her pregnancy for her fourth child in February.

According to tabloid site Radar Online, at least four of his 19 siblings were in attendance. None of the family was aware of the pending arrest when the event took place.

The couple is expecting a girl. They shared video on Twitter of pink confetti falling out of an umbrella that Josh is holding, while their children run around them.

It’s a GIRL!!!!!
🎀
We are overjoyed to announce baby seven is on the way and we can’t wait to hold her in our arms this fall! pic.twitter.com/sFokoh6TBH

Duggar was arrested and charged with possessing and receiving child pornography on April 30. The 33-year-old was apprehended in Arkansas and is currently being held without bond.

The former “family values” reality show star allegedly downloaded images, “some of which depicts the sexual abuse of children under the age of 12, in May 2019,” according to charging documents. His home and car was first reportedly raided by federal officials in November 2019.

Accusations that he had molested his younger sisters had previously cost Duggar his job with the Family Research Council (FRC), an anti-LGBTQ hate group, in 2015.

Duggar rose to fame on the hit TLC reality show 19 Kids and Counting. He’s the oldest of Jim Bob and Michelle Duggar’s 19 children and now, at age 33, he already has six children of his own.

He cashed in on his fame from the show and became the executive director of FRC Action, a PAC run by the SPLC-designated anti-LGBTQ hate group. He appeared at rallies to oppose marriage equality across the country and was a public face for the organization.

Gender reveal parties are events organized for expectant parents where a stunt – usually cutting into a cake to reveal pink or blue, but often more elaborate and deadly – “reveals” the fetus’s sex that will be assigned at birth.

They have already resulted in dead fathers, dead grandmothers, multiple plane crashes, a 47,000-acre wildfire in Arizona in 2018 as people try to get impressive photos and videos to share on social media, and last summer’s largest wildfire in California, which killed a firefighter.

In February, a cannon-like device used for a gender reveal at a party exploded, damaging multiple cars in its vicinity and hitting Evan Thomas Silva, 26, of Hartland, Michigan, who was no more than 15 feet away. He later died at a hospital. Later that month, Christopher Pekny of Liberty, New York was preparing an explosive device for a gender reveal party when it prematurely exploded. Christopher was pronounced dead and his brother was hospitalized.