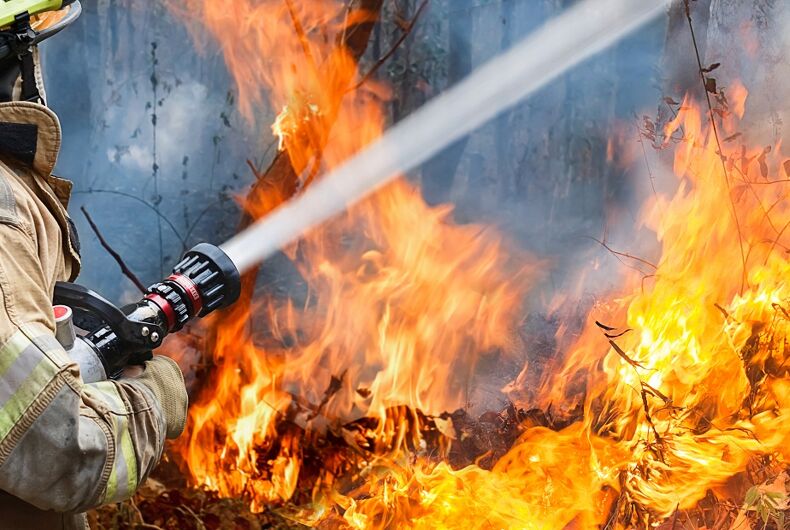 A gender reveal party in southern California resulted in a wildfire that has burned almost 10,000 acres so far.

In a statement posted to Instagram over the weekend, the California Department of Forestry and Fire Protection (CalFire) said that the El Dorado Fire in San Bernadino County was caused by “a smoke generating pyrotechnic device, used during a gender reveal party.”

The party started at 10:23 a.m. on Saturday morning at El Dorado Ranch Park, according to the statement, and spread quickly due to “dry conditions and critical fire weather.” The fire is considered only 7% contained so far.

The statement also says that those held responsible for wildfires due to “negligence or illegal activity” can be forced to pay damages and face criminal penalties.

“It really is a tragedy, it’s sad. They were hoping to remember the day in a different way,” said CalFire investigator Capt. Bennet Milloy. Milloy said that over 80% of wildfires are caused by humans.

Gender reveal parties are events organized for expectant parents where a stunt – often cutting into a cake to reveal pink or blue – “reveals” the fetus’s sex that will be assigned at birth. They have already resulted in dead grandmothers, plane crashes, and a 47,000-acre wildfire in Arizona in 2018 as people try to get impressive photos and videos to share on social media.

Karvunidis, whose child is gender non-conforming, spoke out again against gender reveal parties in the wake of the El Dorado Fire.

“Stop it,” she wrote on Facebook. “Stop having these stupid parties. For the love of God, stop burning things down to tell everyone about your kid’s penis. No one cares but you.”

“It was 116 degrees in Pasadena yesterday and this tool thought it would be smart to light a fire about his kid’s dick. Toxic masculinity is men thinking they need to explode something because simply enjoying a baby party is for sissies.”

“Oh, and of course I’m getting hate messages. Excuse me for having a cake for my family in 2008. Just because I’m the gEnDeR rEvEaL iNVeNtoR doesn’t mean I think people should burn down their communities,” she wrote.

Oh my god NO.The fire that evacuated parts of California is from a GENDER REVEAL PARTY.Stop it. Stop having these…

Posted by High Gloss And Sauce on Monday, September 7, 2020

On Twitter, people had some choice words for the expectant parents who caused this fire.

Instead of blowing up things for a gender reveal party, the parents to be should hand out wallets. If there’s a dollar inside, it’s a boy, if there’s 72 cents, it’s a girl

Gender reveal parties, but instead of blowing up something to see blue/pink smoke, at the crucial moment, an Anthropology Professor emerges to give an hourlong lecture on how gender is a social construct while everyone is served rainbow cake

A gender reveal party where you reveal all of the harmful things you learned about gender roles and norms and vow not to pass them onto the next generation.

imagine having a gender reveal party that burns over 7,000 acres. i swear, people say “how will i explain gay people to my child,” consider this, how will you explain millions of dollars of property damage to your kid, just so you know to buy pink or blue pajamas

That time the dinosaurs held a gender reveal party pic.twitter.com/D3StHYuqQN

Labor unions can protect LGBTQ workers even when the law fails