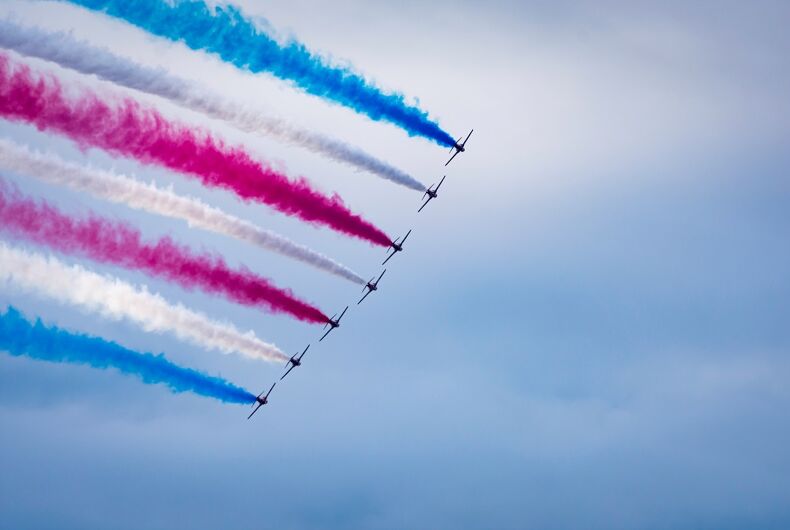 A gender reveal party in Texas ended in a plane crash when the gender-revealing stunt went awry.

According to an accident report filed with the National Transportation Safety Board, pilot Raj Horan was supposed to fly over a gender reveal party in the small town of Turkey in northern Texas and dump 350 gallons of pink-colored water, indicating that a fetus in the party below has female genitalia.

The report says that there was nothing mechanically wrong with the plane, but it “got too slow,” aerodynamically stalled, and crashed upside-down.

It was a single-passenger plane but that two people were in it. Horan was not injured and the passenger only suffered minor injuries, but the plane itself “sustained substantial damage.”

Gender reveal parties are events organized for expectant parents, where the parents and guests find out the sex that will be assigned to the child through some sort of stunt or device. For example, the parents can cut into a cake to find out if the inside is pink or blue, “revealing” the sex that they will assign their child when born.

The parties are problematic for LGBTQ people because of the emphasis they put on sex assigned at birth. The parties usually rely on gender stereotypes – a football if it’s a boy, dance slippers if it’s a girl – and parents sometimes aren’t shy about hiding their disappointment that they wanted a child of a different gender.

The woman who popularized gender reveal parties in 2008, Jenna Karvunidis, expressed regret about them earlier this year.

“It just exploded into crazy after that,” she said. “Literally – guns firing, forest fires, more emphasis on gender than has ever been necessary for a baby…. Who cares what gender the baby is?”

Last month, a grandmother was killed in Iowa during a gender reveal. The family constructed a pipe bomb that was supposed to explode and release pink or blue powder in the air, and a piece of shrapnel hit the woman when the pipe bomb exploded.

In 2017, a gender reveal-gone-wrong sparked a wildfire that burned 47,000 acres and caused over $8 million in damage when an explosive substance was shot with a high-powered rifle.

It’s not a coincidence that gender reveal parties sometimes end in tragedy; it’s related to the way many people understand gender. To the people who host these parties, the sex assigned to a baby at birth is extremely important. Assigning the sex is a defining moment for the baby that will determine what kind of person they will be for the rest of their lives.

The goal of these parties, for many parents, is to create an Instagram-worthy moment. Unlike the baby showers of yesteryear, where the goal is to celebrate the coming baby, bring together people who will have some sort of relationship with the baby and the family, and help the expectant parents defray the costs associated with the baby, a gender reveal party is a product of the age of social media and is about sharing information.

As long as some people believe that a child’s gender is the most important thing that people can know about them – and that sex assigned at birth determines a person’s gender identity and gender expression – gender reveal parties will continue to use pipe bombs, guns, and planes in dangerous stunts.

Cutting into a cake just doesn’t get shared like a pipe bomb.