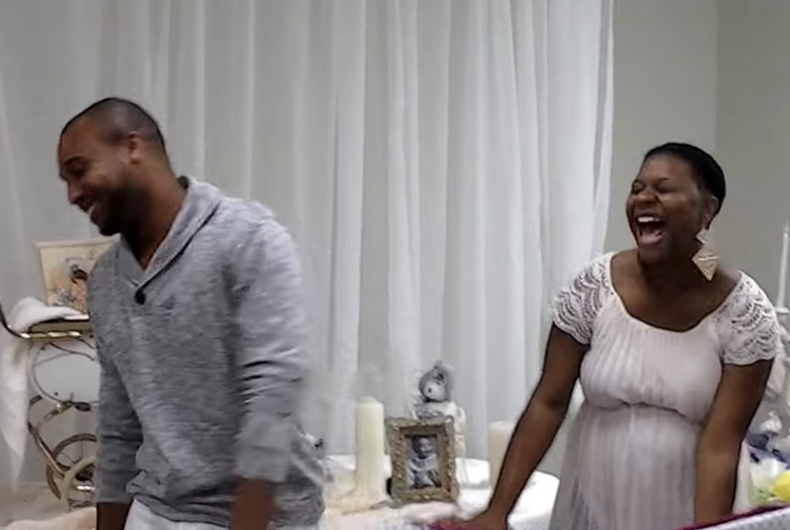 A disappointed dad-to-be goes off to sulk.Photo: Screenshot/YouTube

Gender reveal parties are a cultural phenomenon and they’re not going away. And don’t try to criticize them.

Gender reveal parties are just about fun – of course parents don’t care if they’re having a boy or a girl. That’s why parents gather their loved ones around, serve party food, build up anticipation, and then cheer the announcement – to show how little they care about gender.

And if we didn’t have gender reveal parties, then we wouldn’t have video proof of “gender disappointment” – that feeling that 20% of mothers say they experience when they find out the sex of their baby, according to Louann Brizendine, a neuropsychiatrist at the University of California – San Francisco.

Related: Prince Harry & Meghan Markle want to raise a child with a ‘fluid approach to gender’

In this first video, a couple’s guests were congratulating them on having a boy before they even opened their balloon box. When pink balloons came out, though, the dad didn’t hide his disappointment and someone even said, “I’m sorry.”

That kid will have so much fun showing this video to a psychiatrist one day!

These people couldn’t hide their disappointment when they found out the baby was a girl, audibly shouting “Awwwwwwwww.”

This grandmother is downright angry to find out she’s having a granddaughter, muttering, “A fucking girl.”

What a convincing performance!

This dad said, “Yay it’s a girl,” in just about the flattest tone possible.

When his wife asks, “Is Daddy happy?” he sarcastically responds, “Daddy’s always happy.”

In January we will be adding another baby to the family and we couldn’t be more grateful! Three babies in three and half years has me thinking we’re crazy, but our lives are already crazy so what’s adding another baby!😬😂💗 #noneofthemwereplannedlol

Haha, this dad pretended to kill himself when he found out he was having another daughter!

Casually joking about how little he values girls in front of his daughters? Fun!

This father was happy to find that he was having a boy… so happy he smashed the cake up entirely when he saw that it was blue.

At least he had a positive reaction. Who thinks he would have done the same for a girl?

There are lots of videos on social media where the gender reveal fails; that is, the thing that was supposed to reveal the baby’s sex was not properly prepared.

In this video, the parents opened a box and found a football inside, which meant that their baby would be a boy because girls can’t play football.

But then… oops, grandma read the letter wrong and the baby is going to be assigned female at birth.

Sure, the parents didn’t throw a tantrum or anything when they noticed the mistake, but this girl will now always have video proof of how happy her father was when he thought that he was having a boy instead of her.

These parents open a box and pink or blue balloons were supposed to pop out.

But they got six balloons in pride flag colors. Instead of cheering how their baby is going to be L, G, B, T, or Q, they look positively pissed off.

The “bad reactions to gender reveal” genre is mostly children throwing tantrums about their future siblings. This girl bursts out in tears when she finds out that she’ll be having a baby brother.

Another girl has a bad reaction to finding blue frosting in a cake.

This girl ran away screaming “I hate boys!”

This boy couldn’t handle having a baby sister.

Why are there so many kids on social media throwing tantrums over a baby’s sex?

One possibility is that these kids have already absorbed how incredibly important gender is, that their entire relationship with this person will depend on it, but they haven’t yet learned how to control their feelings and pretend like they don’t care.

Kids know that if there’s cake involved, then something is important.

Like LGBTQ people who feel that their parents were disappointed because they didn’t live up to their gendered expectations and women who were told by their parents to limit their dreams just because of their gender, kids know that this isn’t just mindless fun.

This June, YouTube will release a documentary on Pride directed by two Oscar-winning gay filmmakers