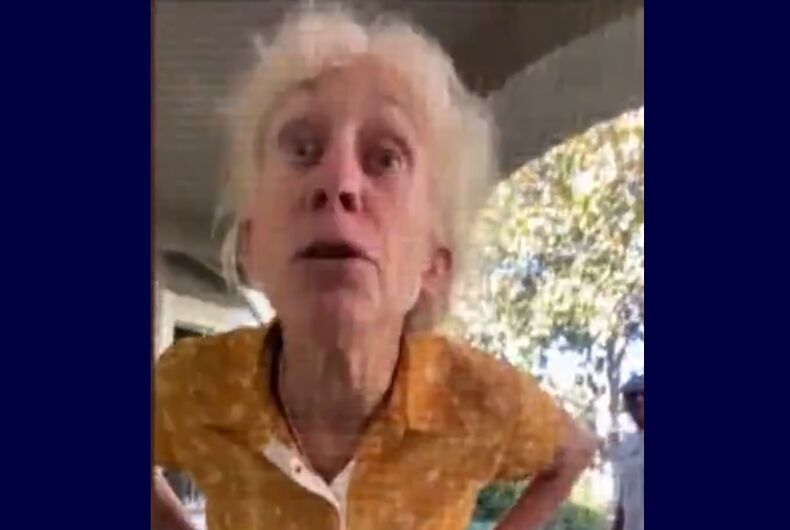 The woman caught on cameraPhoto: via KRON 4 News

A white woman was caught on camera kicking, screaming, and knocking a phone out of a person’s hand who was recording her outrageous reaction to a Black family’s gender reveal party.

Elijah Johnson said that he and his family were invited to a home in Saratoga, California – just outside of San Jose – to host a gender reveal party there this past Saturday. The neighborhood is predominantly white; the homeowner had rented the property to the group.

When his family showed up, she blocked them with her car and then she kicked their car, telling Johnson and his family to leave because the party, she said, was “illegal,” possibly referring to coronavirus restrictions.

The woman can be seen in video taken by the party’s host on their phone. She wasn’t wearing a mask and she ran up to the house, kicking and punching the door.

“This party is illegal,” she said to the camera through an open window. The host said it’s not, and then she punched the phone out of his hand.

“I’m having friends over,” they told the woman.

Santa Clara County deputies visited the woman’s home and did not arrest her.

“If you believe a party is illegal for whatever reason, for COVID restrictions, that’s fine,” Johnson told KRON 4 News. “But I’m sitting here looking at this and I’m like, ‘Wow, I can’t believe someone is so infuriated, so enraged, at something that has nothing to do with her.'”

Johnson says that he believes that she was motivated by racism, while the homeowner said that she might have just been upset about COVID restrictions. She did not wear a mask in the video, even while she was standing close to others and yelling at them.

Drago Renteria is the father of Deaf queer activism