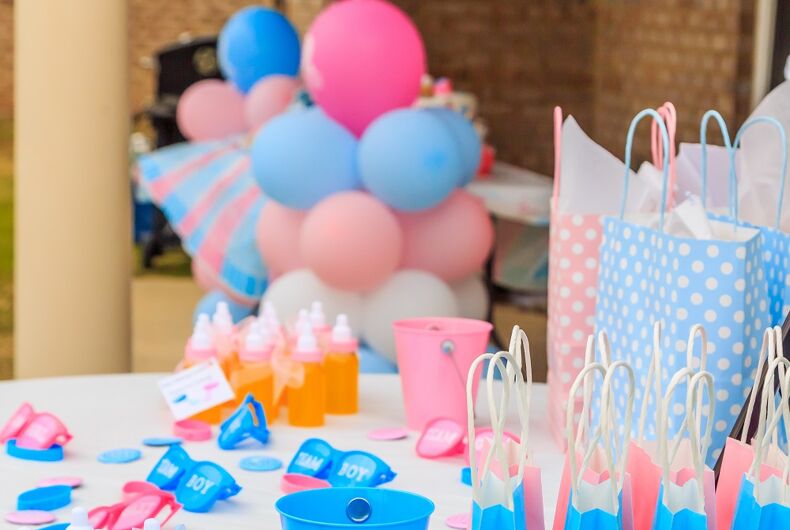 Love Gwaltney wrote a Facebook post last week to announce that she has a non-binary son named Gray and to post pictures of the gender reveal party.

She wrote about how important her child’s sex was to her when she was pregnant: “We get so excited, picking out clothes and nursery decor based on the sex of our babies. We throw parties, and pick out names. We assign attributes (like strength or beauty) based on what our child has growing between their legs. And MOST of the time, that works out perfectly fine.”

“But sometimes, we force these expected characteristics based off biological sex, and *gasp* we’ve gotten it wrong,” she wrote.

She and her husband said that they were wrong when they announced, 17 years ago, the birth of their daughter, and now they were going to get it right and announce their non-binary son Grey.

“He’s much like any other 17 year old nerdy boy, stays up way to late gaming, hates showering, and eats too much junk food,” she wrote.

Not only did these supportive parents hold a gender reveal party, they hired a professional photographer to capture the moment.

For the gender reveal, the Gwaltneys opened a big box and Gray jumped out with balloons in the colors of the non-binary flag (yellow, white, purple, and black).

Later, they had a cake in the colors of the transgender flag.

“I wanted the transgender flag in there because I still feel that going from whatever you are originally to nonbinary is also a transition and it doesn’t just have to be straight female to male,” Gray told CNN.

The Facebook post announcing their son with the pictures of the gender reveal party has been shared over 50,000.

Boy or girl?…………..The first thing we wonder about when we get pregnant (after all the holy crap! I'…

What fresh hell is this? Gay icon Dorothy Parker may need a new resting place.