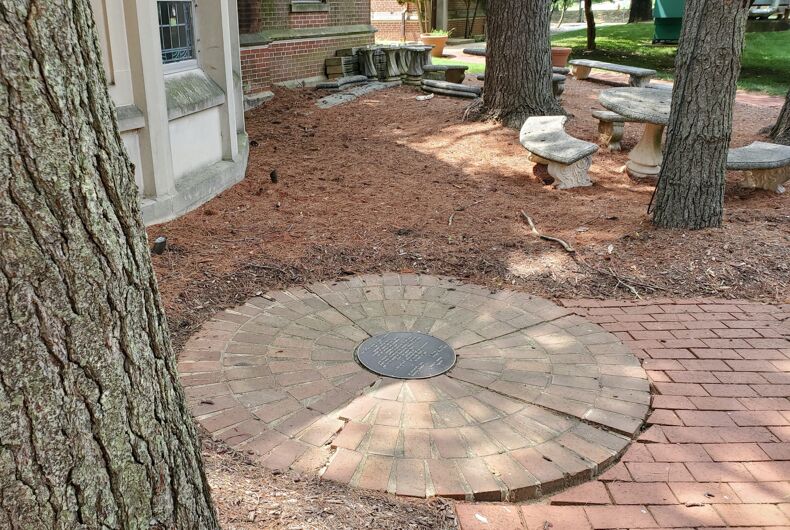 When the late writer and gay icon Dorothy Parker answered her doorbell, she reportedly always said: “What fresh hell is this?”

It’s unclear what fresh place Parker’s spirit ended up, but her remains may soon need a new resting place.

The organization in charge of Parker’s ashes has announced plans to move its national headquarters to a new city, raising questions about the status of her current burial spot.

The NAACP is the steward of Parker’s ashes, which are buried in the Dorothy Parker Memorial Garden behind its former headquarters in a northwest Baltimore business park.

The civil rights organization moved last year to an office in a tower in downtown Baltimore, leaving Parker’s remains in the memorial garden it created 32 years ago at 4805 Mount Hope Drive. This summer the NAACP has plans to move yet again — to Washington, D. C.

Baltimore officials have indicated they’ll attempt to keep the NAACP in Baltimore, but Washington Mayor Muriel Bowser announced last month that it has signed a letter of intent to move to a new building that would replace the Frank D. Reeves Center of Municipal Affairs.

The city’s plan is for the building to be torn down to make way for the NAACP headquarters and possibly other occupants. A timetable for the move has not been set.

Two current tenants of the Reeves center that would be displaced are the D. C. Center for the LGBT Community, an occupant since 2013, and the Mayor’s Office of LGBTQ Affairs.

Lost amidst the lease negotiations and intercity rivalry is the memory of Parker and how her ashes came to be controlled by the NAACP in the first place.

Born in Long Branch, New Jersey, in 1893, the writer and humorist is well known for the caustic humor she displayed in articles for The New Yorker, Vanity Fair, Vogue, and other publications. She was a founding member of the Algonquin Round Table, a circle of New York writers, critics and actors who met for lunch at the Algonquin Hotel in the 1920s.

More than half a century after her death in 1967, Parker has a large LGBTQ following, including fans of both her writing and the way she lived her life. The drag queen known as Miz Cracker recently played her in an episode of RuPaul’s Drag Race. In certain circles, when people say they are a Friend of Dorothy, they mean Dorothy Parker the city girl, not the farmgirl who landed on a witch.

According to biographers, Parker was married to an openly bisexual man who called himself “queer as a billy goat.” She was a screenwriter on the original version of A Star is Born. She surrounded herself with gay male friends that she invited to her lavish Jazz Age soirees, telling them to say they were a “Friend of Dorothy” as a code phrase for entry.

While winning accolades for her writing, Parker also led a troubled life, including three marriages and at least two suicide attempts. She was placed on the Hollywood blacklist for her involvement in left-wing politics during the McCarthy era. Her use of humor to get through difficult times endeared her to LGBTQ fans.

Many of her wisecracks sprang from her liberal views on sex, sexuality, and money.

“Heterosexuality,” she once said, “is not normal. It’s just common.”

“Ducking for apples – change one letter and it’s the story of my life.”

“If all the girls attending [the Yale prom] were laid end to end, I wouldn’t be at all surprised.”

And her advice to women for festive occasions: “If you wear a short enough skirt, the party will come to you.”

Parker was the source of many sayings that are still around today, such as: “Men seldom make passes at girls who wear glasses,” and  “Vice is nice, but liquor is quicker.”

After she and Clare Booth Luce met in a doorway and Luce said, Age before beauty,” she retorted with “Pearls before swine.”

About one of Katherine Hepburn’s stage performances, she quipped, “She ran the gamut of emotions, from A to B.”

One of the best one-liners was a remark she made when she was informed that President Calvin Coolidge had died. “How could they tell?” she asked.

But how did she become associated with the NAACP and wind up in the Seton Business Park?

According to the website JStor Daily, Parker was a strong supporter of the civil rights movement and “when she passed away in 1967, Parker’s estate was bequeathed to [civil rights leader] Martin Luther King Jr., a man she had never met.”

If King were to die, she said in her will, she wanted her estate to go to the NAACP, then still known as the National Association for the Advancement of Colored People.

King was assassinated in 1968, less than a year after Parker died, so her estate went to the NAACP, including her literary rights. That’s the short version of how the NAACP headquarters came to be her resting place.

Unfortunately, before she died, widowed and childless, Parker asked to be cremated but didn’t leave specific instructions for what to do with her ashes. The executor of her estate was the playwright Lillian Hellman, who had wanted to inherit her estate. For years Parker’s ashes were kept by Hellman’s lawyer, who stored them in a filing cabinet in his office.

A suggestion was made to move Parker’s ashes to the bar at the Algonquin, but the hotel reportedly didn’t want them. In 1987, concerned they would be lost, gossip maven Liz Smith wrote a column urging the NAACP to claim “the ashes of their benefactress,” and it did.

In 1988, then-NAACP executive director Benjamin Hooks and then-Baltimore Mayor Kurt Schmoke dedicated the memorial garden, with a brass urn containing her ashes. The burial spot is marked by a circle of bricks, representing the Algonquin Round Table, and a round metal marker with an inscription that reads:

Defender of human and civil rights

For her epitaph she suggested

This memorial garden is dedicated to her noble

Spirit which celebrated the Oneness of Humankind

And to the bonds of everlasting friendship between

Parker’s memorial garden has not been well maintained over the years. A Baltimore-based blogger and historian, Meg Fairfax Fielding, wrote that she paid a visit in 2017.

“I was very disappointed to find it in the back of the building, with broken cement benches scattered around, a tipped over plant laying on top of the plaque and the whole site in general disrepair,” Fielding wrote. “The NAACP is her literary agent, and I am sure they get a significant sum from acting as such. The least they could do is care for Dorothy Parker’s final resting place.”

With the NAACP’s pending move, the organization has begun exploring what to do with Parker’s remains.

“Her legacy means a lot,” Blankson was quoted as saying. “It’s important to us that we do this right.”

Fans have also begun to weigh in on the Dorothy Parker fan page on Facebook. Many have suggested that New York City would be the best spot, possibly the Parker family burial plot in the Bronx or a location close to the Algonquin if not the Algonquin itself.

“It’s kind of heartbreaking that she’s being moved again,” Ellen Meister, a fiction writer who oversees the fan page, told the Sun.  “She really suffered so much disrespect in terms of her final remains. It’s a tragic end to a very difficult life.”