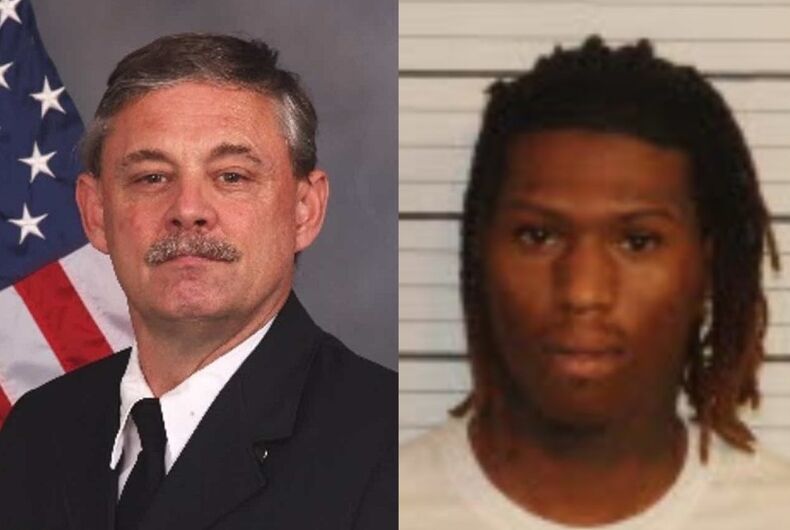 A 21-year veteran of the Memphis Fire Department was shot to death in a park last week Wednesday, and the man who shot him allegedly admitted to it, saying that the firefighter hit on him and made him feel “uncomfortable.”

Carlton Wells, 23, and his girlfriend Danielle Mack, 39, were arrested by Memphis Police this past Friday in connection to the death of Mack Bond, 58. According to the police report, Wells admitted to the killing and said that it’s Bond’s fault for hitting on him in public.

Wells told investigators that he and Mack were hanging out in a rented car in Kennedy Park in Memphis, which is a gay cruising area.

He said that Bond approached him and his girlfriend and hit on them, which made Wells feel “uncomfortable.” He said that he pulled out his gun and shot Bond multiple times.

Mack and Wells drove away and Bond died at the scene. They were arrested two days later.

Wells has been charged with second-degree murder and possession of a handgun as a convicted felon.

Mack has been charged with tampering with evidence since she drove the car back to the rental shop and claimed that there was a transmission problem in order to exchange it.

Two arrests were made in this case. Carlton Wells was charged with second-degree murder and convicted felon in possession of a handgun.
Danielle Mack was charged with tampering with/ fabricating evidence. pic.twitter.com/DcSu3WnIaZ

“The Memphis Fire Department are deeply saddened to hear of the sudden and tragic off-duty death of firefighter Mack C. Bond,” Memphis Fire Chief Gina Sweat said in a statement.

“Mack faithfully served as a member of this department for over twenty-one years and was a valued member of our MFD family. He will be greatly missed. Our sincere condolences are extended to his family, friends, and the brothers and sisters of the Memphis Fire Department. RIP Mack Bond.”

The gay panic defense is when a defendant in an assault or murder says that they acted in a state of temporary insanity someone of the same sex made unwanted sexual advances. It can be used to argue that they had diminished capacity or were acting in self-defense, and it is based on the idea that gay people – especially gay men – are predators or that being gay is a provocation.

Eleven states have banned the gay panic defense, but Tennessee is not among them. The state’s hate crimes law includes sexual orientation.

It is not yet known if Wells will use the gay panic defense in court.