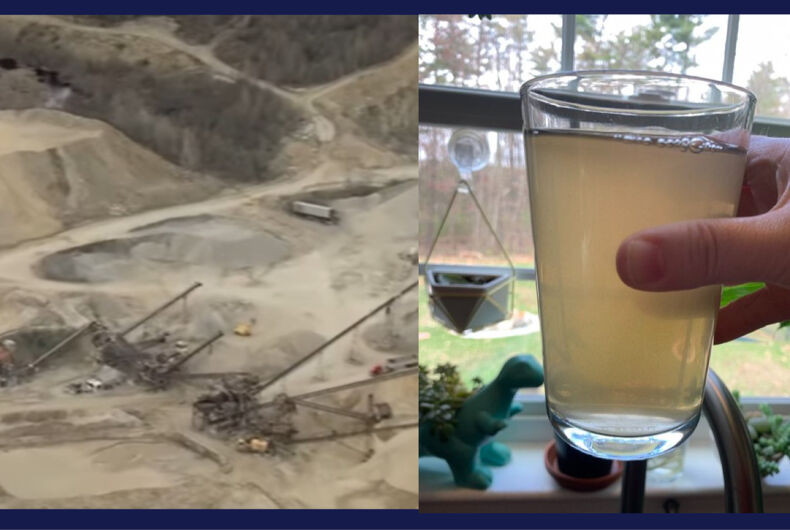 Officials confirmed that a gender reveal party was the source of an explosion in New Hampshire that rocked a large stretch of the New England state and left contaminated tap water in its wake.

The explosion reportedly involved 80 pounds of explosives from Tannerite, a brand of explosion kits that are unregulated by the Alcohol, Tobacco and Firearms (ATF) Bureau and can be sold over the counter. In addition to the contaminated water supply, large booms shook homes that are miles away, some of which suffered internal damages.

The explosion was set off by a man hosting a Kingston, New Hampshire gender reveal party on the evening of Tuesday, April 20. The explosion reportedly originated behind a quarry attached to a plant in the area. He chose the plant because he believed it would be safer to use explosives there, although there are several residential areas in the immediate area.

The plant occasionally sets off explosions, but it alerts people in the area about 24 hours in advance. There were no advance warnings prior to this explosion. Residents of the area called 911 believing the explosions were the cause of something else.

Residents reported that their tap water was now discolored, and Maggie Jasmin shared a photo of it online that went viral.

Someone blew up a gravel pit with tannerite for a goddamn GENDER REVEAL and now our tap water is brown.

I wish I was joking!!!! pic.twitter.com/mbROG536Sb

“I’m hoping that in the next 24 to 48 hours it will settle and resolve itself. If not, we’ll probably be taking showers at my in-laws,” they told the New Hampshire Union-Leader on April 22.

Jasmin, who is agender, added, “The house shook and my dog and cat freaked out. My son slept through it.”

Matt’s wife, Sara, expressed that she was still upset.

“We are all about celebrating happy moments like having a baby, but their celebration was felt and heard not only by different neighborhoods but through different towns,” she said. “It’s not like we are upset because there was blue or pink confetti on our yard. It was such a large blast.”

“To find out it was a gender reveal — it was extreme. You are not expecting pictures to fall off your wall at 7 p.m. while you’re having dinner from somebody celebrating having a baby,” Sara added. She wants both the man who set off the explosion and the property owner held accountable.

Gender reveal parties are events organized for expectant parents where a stunt – usually cutting into a cake to reveal pink or blue, but often more elaborate and deadly – “reveals” the fetus’s sex that will be assigned at birth. They have already resulted in dead fathers, dead grandmothers, multiple plane crashes, a 47,000-acre wildfire in Arizona in 2018 as people try to get impressive photos and videos to share on social media, and last summer’s largest wildfire in California, which killed a firefighter.

Any injuries directly caused by the explosion have yet to be reported.

The Kingston Police Department have not yet charged the man behind the explosion, because he turned himself in and is currently cooperating. They state that an investigation is pending.

UPDATE: Kingston police say approx. 80 pounds of Tannerite were used at that gender reveal party that caused a massive explosion that shook homes for miles. Man who detonated it has turned himself in to police and is cooperating. Police haven’t decided on charges. @UnionLeader

More death and destruction and alarm and fear has been caused by straight couples and their “gender-reveal parties” than will ever be caused by trans and non-binary and gender-nonconforming people just trying to live their lives. pic.twitter.com/ZnnRZcWdCl

For the life of me I can’t understand how buying a few bags of fertilizer is tracked by the ATF, but every Cletus out there can buy enough Tannerite to level a small city without any problems. This stuff is dangerous, and idiots are allowed to shoot it! Unbelievable.

Basically if you go to a gender reveal party now you should expect to kill or be killed.

Utterly fucking dumb trend even without the carnage and forest fires. https://t.co/Gl6FnEFKi0

By the way, they’re having a boy.