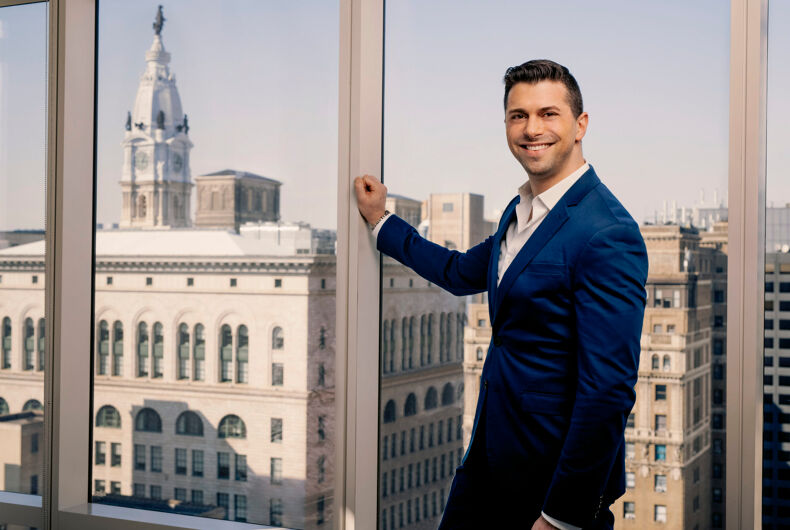 Longtime LGBTQ activist Jonathan Lovitz (D) recently announced his candidacy for the Pennsylvania House of Representatives—and he is fired up.

In a conversation with LGBTQ Nation, Lovitz spoke with energy and vigor about what representing his state’s 182nd district (which encompasses Philadelphia’s Center City) would mean to him.

“I’ve been fighting for the last decade,” he said. “My entire life has been centered around advocating and winning for the LGBTQ community, as well as people of color, people with disabilities, veterans, and so many more. I want to take the lessons I’ve learned in successfully advocating, especially for bipartisan policies…all the way to Harrisburg.”

It's official: I'm running for the PA House of Representatives. I believe I am the pro-economy, pro-equity, pro-solutions candidate this moment needs to deliver results for Center City Philadelphia, and all of PA. Let's Make a Difference! https://t.co/bkhQQXF7EL #LovitzForPA pic.twitter.com/UNU4569PF9

For the past five years, Lovitz has served as Senior Vice President for the National LGBT Chamber of Commerce, a nonprofit organization that advocates for the LGBTQ business community.

A well-known advocate, Lovitz has built a reputation as someone who will stop at nothing to help his community succeed. His fervor for this work earned him the title of “2019 Queer Icon” by Advocate magazine, and in 2016, Passport Magazine called him “A Force to be Reckoned With.”

Through his work at the National LGBT Chamber of Commerce, Lovitz has helped pass more than 25 laws in 13 states, including expanding the definition of minorities to include LGBTQ people in New York City, Chicago, and Los Angeles. Most recently, he helped pass Texas’s first LGBTQ economic expansion law in Houston.

“The bulk of my work has been in the LGBTQ segment,” he said, “but we are women, we are people of color, we are veterans and immigrants and small businesses owners and teachers and everything that is here in this incredible district. So I know their needs and I want to listen to how I can help them gain the success and opportunity they need.”

As a state representative, Lovitz, who promised in an op-ed that “every possible element of my campaign be sourced from Philly-based small, minority, and LGBTQ-owned businesses,” hopes to prioritize equitable healthcare access, curbing gun violence, and economic growth in Philadelphia.

The NRA is scared. Good. Now they know how our kids feel in school or on city streets.

“A strong economy and a strong workforce is essential to addressing everything else that has led to some of the systemic problems, from racism to police violence to homelessness and so much more. The more secure we can make our families and our business owners, the faster we all recover.”

Voting rights is another issue that means a lot to him. In 2020, Lovitz was a co-organizer of PhillyVoting.org, a voting initiative meant to increase LGBTQ and Black voter turnout in the city. The initiative succeeded at registering almost a thousand new voters.

The aftermath of the 2020 election, in which Pennsylvania’s results were repeatedly challenged, made him want to work even harder to help people vote.

“Watching the legislature try to invalidate the entire commonwealth’s vote was quite an eye opening experience,” he said, “and taught me that we have to do even more to encourage civic engagement and protect the vote.”

HAPPY EARTH DAY! 🌍
PA, we have incredibly important elections coming May 18, and deadline to register is May 3! Knowing we can elect those who will join us in saving our planet is pretty powerful! #VotesPA

Throughout his career, Lovitz said he has witnessed how quickly things change for the better when people are given a “free and fair shot to win.”

“It doesn’t mean anyone else loses when you have the same fair shot to win that they do,” he said. “It means we all have more opportunities to share with each other.”

He also acknowledged his privilege as a cisgender white gay man and said he knows it gives him the ability to enter certain rooms and sit at certain tables without question.

He sees this privilege, he said, as a “sacred obligation to elevate the voices who are not there and then add chairs to that table for those who are not invited.”

One of the biggest lessons he has learned throughout his career, he said, is to listen.

“Hear what the community needs and respond. Don’t just take the advice of those with the most access and the most privilege. Listen to everyone and act in what makes the most impact for the most people.”

Above all, Lovitz wants voters to know that this is personal for him.

“This is my home, and I have skin in the game about seeing the 182nd district succeed. I am here to be present and available and ready to serve on day one the needs of every single one of my neighbors the way I hope to always be served by those who represent me in other offices…As someone who has the passion for government and the experience to deliver, I want the people to know that I am fighting for them and that when Philly succeeds, I succeed, and what could possibly be better than all of us doing better together?”