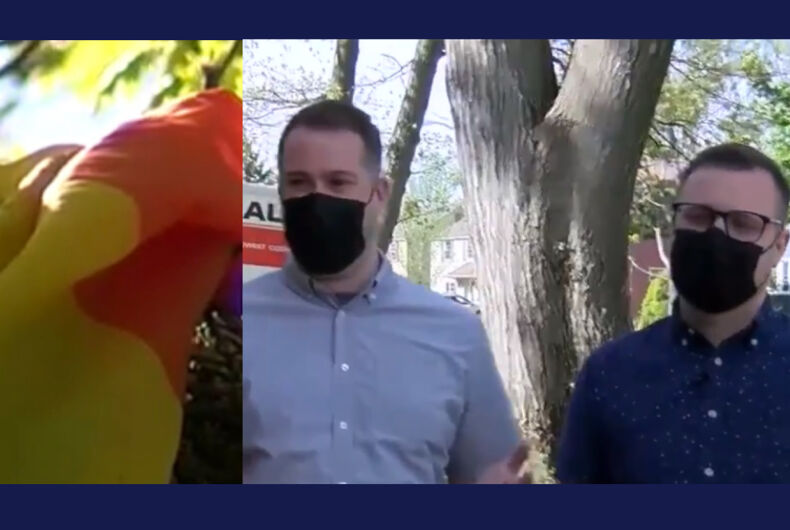 The "stolen" flag of Charlie Olivo (far right) and his husband.Photo: Screenshot/19 News

When a gay couple realized that their Pride flag had been taken from the front of their home in University Heights, Ohio, they sprung into action. So did their community.

Eventually, they figured out who the culprit was — all thanks to their dog, Daisy. It was a raccoon moving into the neighborhood who needed materials for its nest.

Related: Pete Buttigieg & AOC met at the dog park & rumors they were making “deals in the park” have started

Charlie Olivo first noticed his home’s Pride flag was missing when he came home from work on April 27, realizing it could have been taken as early as the night before.

He and his husband turned to Facebook to ask his neighbors if their Pride flags had met a similar fate, but they hadn’t. He hoped to also find if neighbors had surveillance footage.

Neighbors were understandably alarmed that such a thing would happen, and one decided to not only replace it, but order an additional one for Olivo and his husband to give to someone else.

There were still no leads to what had happened, so Olivo and his husband’s dog Daisy jumped on the case.

After sniffing around, the good girl found the culprit, and led the family directly to them.

Not only had they uncovered the Pride flag’s new location, but the culprit was still in possession of it as well.

“I looked and saw a big, fat raccoon walking up the limb, back and forth,” Olivo said. They realized that the raccoon decided to commandeer the flag to fashion a comfy, stylish nest for themselves in a tree right in front of Olivo’s home.

“We were shocked and a little bit like, ‘Oh my gosh, we can’t believe this happened,’” Olivo remarked.

“It was so funny because it had taken off on the Facebook page so much, with the community,” said Olivo’s husband.

After conferring with the rest of the community, Olivo decided to let the raccoon keep their new home. In addition, Hochheiser decided to buy 11 flags, one to replace the “stolen” one, and 10 others for other neighbors, who have now decided to also put up their own Pride flags.

That makes 12 Pride flags in the immediately vicinity of Olivo’s home, since “the raccoon has one as well,” Hochheiser realized.

“It was very heartwarming but a good ending,” said Olivo.

An unlikely bandit takes a couple’s Pride🌈 flag from their University Heights home in broad daylight.