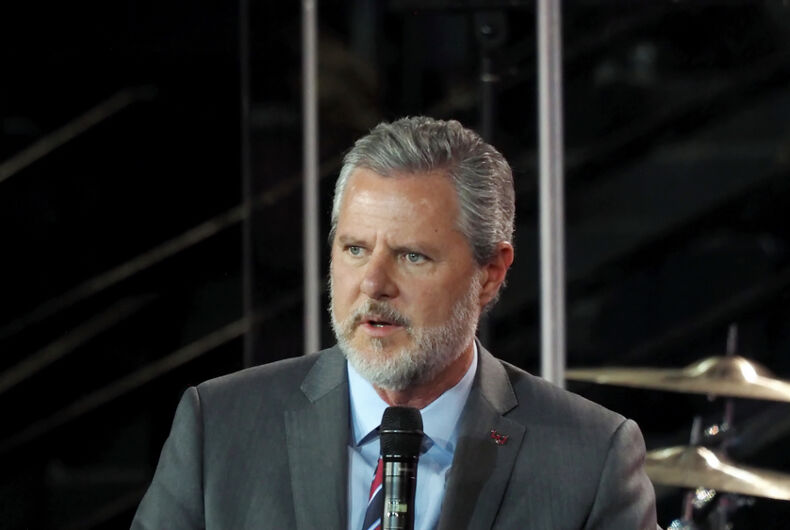 Jerry Falwell Jr., the embattled former president of Liberty University, has rescinded an invitation he gave students a “real graduation” at his home. Video of Falwell offering the invite to students he helmed over just a year ago at the evangelical college went viral online.

Falwell released a statement indicating that the reason behind the sudden change of mind is due to health issues. He is currently on his fourth stay at a hospital due to respiratory emboli, or blood clots that continue to reoccur and block his lungs.

Related: Anti-LGBTQ evangelical group’s leader is planning to rally thousands of men at a NFL stadium

“Last week at an event with Liberty University students, I announced that we would have a big picnic on our family farm for graduating seniors,” Falwell said in his announcement. “Unfortunately, this weekend I encountered another bout of symptoms resulting from the respiratory emboli that were first diagnosed last year. For the fourth time this year I was admitted to the hospital for a series of tests to address my labored breathing and other effects of the emboli.

“As a result, we regrettably must cancel the picnic this weekend.”

Falwell added, “This is a major disappointment to us since we wanted to celebrate the success of the graduating students and show them our appreciation. To them, our entire family extends our sincere congratulations and fond farewell.”

Falwell resigned as the head of Liberty University after numerous sex and financial scandals including cuckolding three-way relationships he apparently had with several young men and his wife. One of those men was a former Liberty University student, and the anonymous student has claimed that Becki performed sexual acts with him and then stalked him for months.

Falwell appeared at a comedy event celebrating this year’s class of seniors on April 30. Falwell not only congratulated the graduating students, but told them in front of their family members, “I just want to invite all the seniors to my farm on May 8. We’re going to have the real Liberty graduation,” he claimed.

He then added, “if you’re not a senior but you date one, you can come, too.”

Falwell was not scheduled to be at the event or announced in advance, according to attendees. He also told the crowd that his own daughter is “probably so pissed at me right now” because she begged him, “please don’t come.”

“Falwell appeared visibly intoxicated, but he didn’t get the drinks from the party,” alumni group Save 71 stated. Liberty University students are not allowed to drink alcohol.

Falwell reportedly told the audience that he would hold the event on May 8, as long as his wife Becki, who was also in the audience, approved.

“Becki says there’s no way we can plan it that fast, but we can and we will,” Falwell said.

He then asked those in the audience to spread the word on social media. “We gotta move quickly,” he said.

Falwell didn’t deny that he was planning to hold the event. He later said that the “real graduation” quip was meant as a joke.

Falwell’s repeated presence on the Liberty University campus has only fueled speculation that Falwell is trying to return to his former position at the school, which he left after a series of sexual and financial scandals. Liberty University is suing Falwell for over $10 million.

Falwell’s first publicized hospital stay came in March, when he revealed the health issue in Instagram posts explaining his “absence” from the school.

Liberty University made national headlines during the early part of the coronavirus pandemic for lax prevention measures and a surge in infections. Falwell did not say in his Instagram post if his lung issues were COVID-related but did disclose that he had been hospitalized repeatedly.

Last night Jerry Falwell Jr. showed up at a @LibertyU party and invited seniors to an end-of-the-year bash at his house, saying, “We’re going to have the real Liberty graduation.” 🤠🤠🤠🤠🤠🤠🤠🤠 pic.twitter.com/MCIWdxb5rg