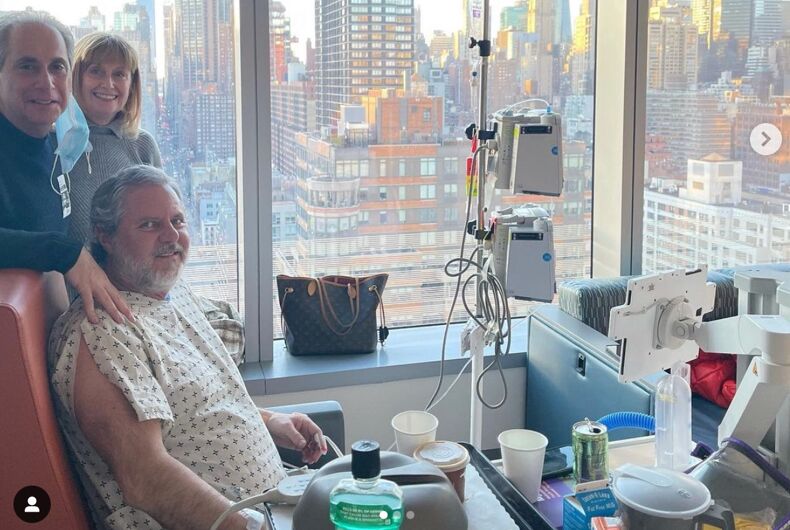 Disgraced far-right evangelical leader Jerry Falwell Jr. has been repeatedly hospitalized with blood clots in his lungs according to a photo posted to his Instagram account.

Falwell resigned as the head of Liberty University after numerous sex and financial scandals including a cuckolding three-way relationship with a young man and his wife.

Related: Third man steps forward to accuse Falwell of sexual misconduct. He was a student at the time.

“Students at LU have asked why I’ve been so ‘absent’ from LU,” Falwell wrote. “Well now you know it’s because my blood oxygen saturation has been between 77 and 92 since August (normal is 96-99). I didn’t even have the strength to go on TV to refutes lies in the press.”

Liberty University made national headlines during the early part of the coronavirus pandemic for lax prevention measures and a surge in infections. Falwell did not say in his Instagram post if his lung issues were COVID-related but did disclose that he had been hospitalized repeatedly.

In September of last year, Falwell got extremely drunk and fell down a flight of stairs, causing his wife Becki Falwell to call 911 say that he’s covered in “a lot of blood right now.”

The incident occurred a week after Falwell Jr. blamed his streak of recent scandals on an alleged years-long affair between his wife and a hotel pool attendant. The pool professional, Giancarlo Granda, came out later that same day saying that Jerry Falwell Jr. supported and participated in their sexual relationship.

“Becki and I developed an intimate relationship and Jerry enjoyed watching from the corner of the room,” he said. Falwell soon resigned from the conservative Christian Liberty University.

For years, Jerry Falwell Jr. has been caught flouting Liberty University’s rules, which ban “social dancing” and drinking alcohol, even for students over the age of 21. He has been spotted in nightclubs and posted pictures of himself with his pants undone to social media, with a drink in hand (he claims it was “black water”).

He said that the people who worked at Liberty enabled Falwell’s bad behavior out of fear.

Hate group’s flier accuses Democrat of being friendly to trans people. He insists he isn’t.