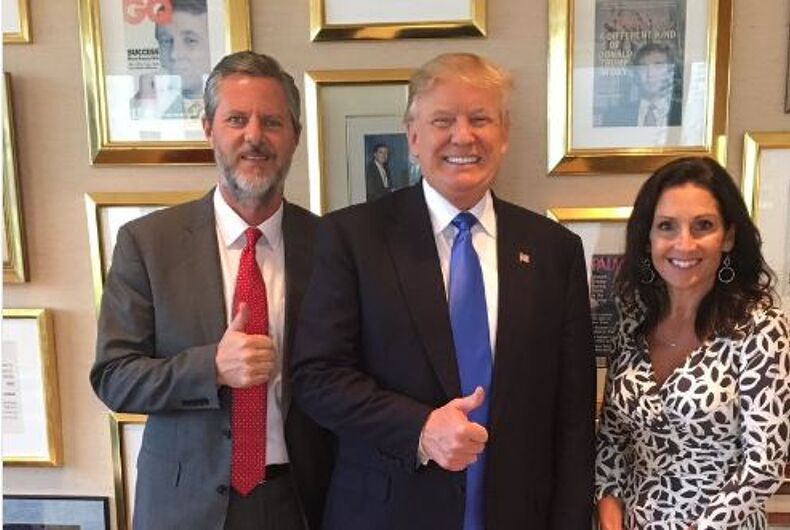 UPDATE 2: Falwell Jr. has resigned as the head of Liberty University.

UPDATE: Giancarlo Granda, the man Falwell Jr. accuses of having an affair with his wife, Becki, has now given proof to Reuters that it was a 3-way relationship, saying “Jerry enjoyed watching.”

Jerry Falwell Jr. is accusing his wife of cheating on him with a hotel employee to explain the bizarre behavior that got him put on leave as president of Liberty University, one of the best known evangelical Christian universities in the country.

“During a vacation over eight years ago, Becki [his wife] and I met an ambitious young man who was working at our hotel and was saving up his money to go to school,” Falwell wrote. “Shortly thereafter, Becki had an inappropriate personal relationship with this person.”

Falwell went on indefinite leave earlier this month from his position at Liberty University, the conservative Christian school founded by his father that bans LGBTQ students, doesn’t allow students to drink alcohol even if they’re over 21 and off-campus, and bans “social dancing” among students.

In 2015, Falwell was sued for the first time in connection to a business deal with former pool attendant Giancarlo Granda. In 2019, Roseanne Barr’s ex-husband Tom Arnold released a recorded conversation that suggested that Donald Trump’s fixer Michael Cohen had helped Falwell resolve an “embarrassing” scandal that involved “racy personal” photos he was being blackmailed with, a scandal that many speculated at the time involved Granda because of the timing and locations of events.

Over the past few years, Falwell was caught dancing in a nightclub and allegedly inappropriately using his position as Liberty’s president to help a young personal trainer build a business. Faculty and staff at Liberty also spoke out against him for his inappropriate behavior, sexually charged comments at the workplace, and alleged abuses of power.

The last straw was when he posted a picture to social media with a younger woman and both their pants were open. He slurred an apology the next day on a morning radio show and was soon put on leave.

Now he’s saying that it was all Becki Falwell’s fault in a 1200-word statement sent to the Washington Examiner. Without naming Granda, the letter says that the Falwells met “an ambitious young man” who worked at a hotel eight years ago who they “encouraged… to pursue an education and a career.”

Jerry said that he later learned that Becki Falwell had “an inappropriate personal relationship” with the hotel employee.

“I lost 80 pounds and people who saw me regularly thought that I was physically unwell, when in reality I was just balancing how to be most supportive of Becki, who I love, while also reflecting and praying about whether there were ways I could have been more supportive of her and given her proper attention,” he wrote.

He said he and Becki Falwell “forgave each other” and admitted that “there were important smaller things I needed to do better too.”

But Falwell Jr. had some more harsh words for the hotel worker, claiming that the man’s family said he has “periodically demonstrated emotionally unstable behaviors with some destructive tendencies, seemingly in response to his inability to achieve his professional goals.”

“We believe that he may have targeted other successful women in similar ways,” Falwell Jr. wrote, implying that Becki Falwell wasn’t an equal participant in her affair with the hotel worker. He did not offer any proof of the allegation.

He said that the former hotel employee blackmailed them and “became increasingly angry and aggressive.”

“Over the course of the last few months this person’s behavior has reached a level that we have decided the only way to stop this predatory behavior is to go public,” Falwell Jr. wrote.

Falwell Jr. wrote that he is now seeking help from “mental health professionals” and that he should have done so earlier.

A big part of Falwell Jr.’s story is dealing with a difficult struggle in secret while hiding it from the media and the people he works with, that he felt ashamed of something that was beyond his control so he had to hide it from everyone around him.

Perhaps this is an opportunity for Falwell Jr. to think about other groups of people who find themselves grappling with secrets but who are too afraid of being kicked out of college to deal with them in healthy ways.

Leslie Jordan is shocked to learn what “WAP” means