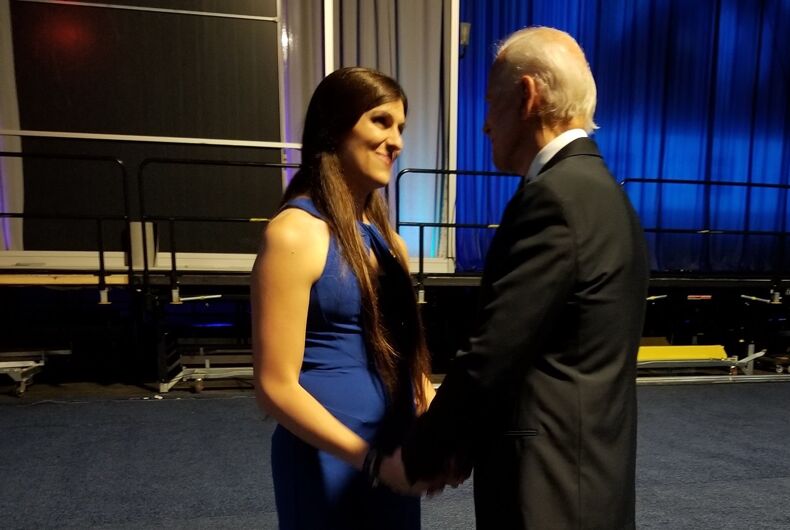 Virginia state delegate Danica Roem (D) made history when she became the first transgender person elected to a state legislature in 2017 and soundly defeated a challenger in 2019 that attempted to weaponize her gender identity to garner conservative votes.

Following former Vice President Joe Biden’s nomination as the Democrats 2020 presidential nominee, Roem posted a heartwarming story on Facebook that quickly went viral. And with the Republican National Convention starting today, it may be what you need to make it through the week.

Biden, who has also been a major supporter of the Human Rights Campaign National Press Secretary’s Sarah McBride in her bid for the Delaware state senate, was an early supporter of Roem’s campaign as well.

And in her moving post about Biden’s generosity of spirit, Roem recounts exactly how helpful – and thoughtful the former vice president was.

I met Joe for the first time while he stood next to his son’s flag-draped casket in Dover. I thanked him for raising a son with the character of Beau because when Beau as Delaware attorney general successfully fought to pass a trans rights bill, he was fighting for people like me.

Despite being exhausted from spending hours greeting well-wishers, Joe rested his hands on my shoulders, looked me in the eye and said, “We mean that. *We* mean that.*

He then kissed the back of my right hand and gave me a hug.

Two years later in October 2017, when I was tied dead-even in the polls against a 26-year incumbent, Joe endorsed my campaign and donated from his PAC, which gave us a huge momentum surge right before our first GOTV dry run.

On Election Night 2017, when 19/20 precincts had reported and I was just waiting on Prince William County absentees, my phone rang. I answered it and the person on the other end asked if I would like to speak to Joe Biden because he wanted to talk to me.

He was the one who broke the news to me that I won and that we changed what’s possible in American politics.

He told me he remembered meeting me that day in June 2015 when he, as the sitting vice president of the United States of America grieving the loss of his son, was willing to tell a trans woman her rights were worth protecting.

When I finally saw him again in person the following year in 2018, when Joe saw me, he walked directly over to me. He remembered who I was. He gushed over how proud he was of everything we had accomplished in Virginia, especially since we were able to expand Medicaid to now 452,000+ Virginians and counting, which was made possible under the Affordable Care Act that Joe was tasked with shepherding through Congress.

Then in 2019, when everyone assumed my race was safe and I didn’t need help, everyone started turning me down for help. It might not mean much the first few times it happens but after months and months and months of it, it starts to freak you out as a candidate when you’re on the verge of not being able to afford to execute your full campaign plan for the final six weeks.

He was the *only* national politician who endorsed my re-election campaign, the *only* one who took the time out to help down the home stretch.

There is no national, state or local politician with whom I agree on every issue. I’m the only member of the Virginia General Assembly who shares my voting record, which is the way it should be.

I could pick apart every single national presidential candidate who ran this year and identify their flaws and sins of the past — all of them. Not one of them was or is perfect.

But the thing is, I don’t expect perfection. I don’t expect to agree all the time and definitely know there will be policy positions taken, votes cast or statements made that are really, really hard to accept because they’ll hurt people.

What I’m looking for is someone who’s learned, someone who’s as close to honest as there is, and someone who’s genuinely trying to do what they think is best while working to make our country more inclusive.

With his platform that includes a $15/hr minimum wage, a genuine commitment to infrastructure, prioritization of the Equality Act and a Medicare public option, I’m not planning to settle on anyone when I cast my vote.

I’m voting *for* Joe Biden and Kamala Harris, not just against Donald Trump and Mike Pence. I don’t expect to agree with them on everything but I do expect those of us who want them to be bold to have a seat at the table. I expect them to default to doing the right thing to help people more often than to hurt people.

I expect them to make progress, even if it’s more incremental than systemic.

I expect them to understand loss, to understand grief and to understand that we’re counting on them to serve their constituents, so we have an administration that stops singling out and stigmatizing the very people they’re elected to serve and starts figuring out how they can help us instead of hurt us.

I wrote this story about meeting Joe Biden as a reply to a comment a couple days ago. Several of you asked me to share…

Jerry Falwell Jr blames his fall from grace on his wife