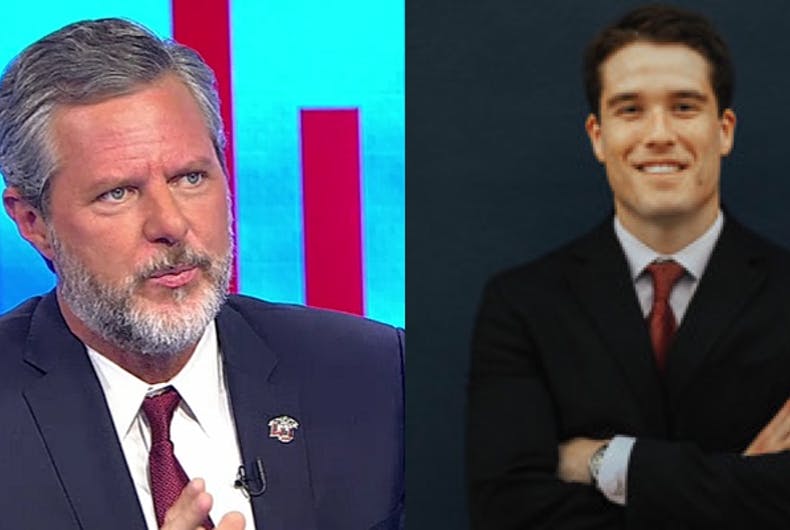 A taped conversation between Donald Trump’s former lawyer and Roseanne Barr’s ex-husband shows that Jerry Falwell Jr. was worried about being blackmailed by someone who had graphic pictures of him and/or his wife, possibly a pool boy they had a close relationship with.

Falwell, the president of the evangelical Liberty University, was one of Trump’s earliest and most loyal supporters, vouching for the reality TV star’s Christian credibility during the Republican primary.

Reuters has obtained a recording of a conversation between Michael Cohen and Tom Arnold, which was recorded without Cohen’s knowledge.

In the 2015 conversation, Cohen said that Falwell asked him a personal favor: deal with someone who had sexual pictures that could prove embarassing.

Cohen said that someone had somehow come into possession of “a bunch of photographs, personal photographs” of Falwell, which he described as the kind usually kept “between husband and wife.”

He did not specifically describe what the photos showed.

According to an unnamed source, Falwell and his wife believed that the photos were embarrassing. The person who had them was demanding money to keep them from being made public.

Cohen then flew down to Florida to talk to the lawyer of the person with the photos. Cohen threatened legal action if the demands didn’t stop.

The other lawyer, according to the source, told Cohen that the photos had been destroyed.

While the identity of the possessor of the photos has not been revealed, that person lived in the same state as Giancarlo Granda, an attractive young pool attendant involved in a legal dispute with the Falwells.

The Falwells met Granda in 2012 and almost immediately offered to loan him $1.8 million dollars to help him start a business.

Falwell “was looking to purchase a business in order to provide a source of income to Giancarlo Granda,” according to a real estate agent quoted in the lawsuit, which was brought by two other people who say they were cut out of the deal.

In 2017, the school made Campus Pride’s Shame List of the worst schools for LGBTQ students.

Wait, so you're telling me the pool boy they befriended was named "Giancarlo"? Nope. Still can't put it together.

Marriage is between ONE man and ONE woman!

AND ONE POOL BOY.