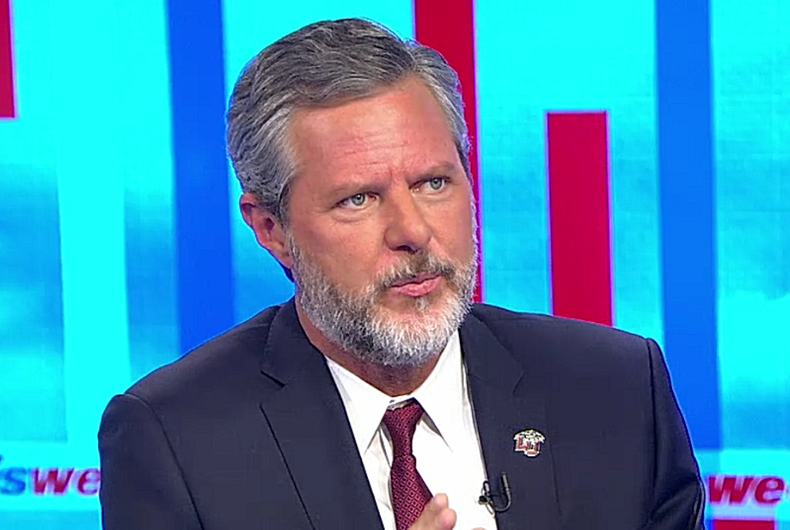 Jerry Falwell Jr., the president of the evangelical Liberty University, has come under fire from graduates of his own university for defending Donald Trump’s statements about the Charlottesville white supremacist rally.

A day after reading a prepared statement last week condemning the violence in Charlottesville, Trump delivered impromptu comments on Tuesday where he equated the white supremacist protestors and the smaller group of anti-racist counter-protesters.

“I’m not putting anybody on a moral plane. You had a group on one side and group on the other and they came at each other with clubs – there is another side, you can call them the left, that came violently attacking the other group,” he said.

Falwell tweeted that Trump’s comments were “bold” and “truthful” and that he was “so proud” of Trump.

A group of Liberty graduates has created a Facebook group called “Return your diploma to LU.” They are hoping to send a message that “could jeopardize future enrollment, finances and funding” if the university doesn’t stop supporting Trump.

Yesterday Falwell appeared on Meet the Press. The White House specifically chose Falwell to represent it on the show, which is strange since usually someone who actually works for the administration is sent to represent it.

Host Martha Radditz repeatedly pressed Falwell on whether he believed there were “fine people” at the white supremacist rally. He responded that Trump “has inside information that I don’t have,” including “videos” of “historical purists” who just wanted to preserve the Robert E. Lee statue located in the park where the rally occurred.

Radditz asked him why, if these historical purists were decent people, did they stay when it became apparent they were at a rally with neo-Nazis and the Ku Klux Klan. Falwell agreed that they should have left, but refused to disagree with Trump’s assessment that they are “fine people.”

Radditz also asked Falwell how he could be so critical of Barack Obama for refusing to use the expression “radical Islamic terrorism” but not criticize Trump for failing to call the white supremacists – including one who allegedly drove a car through a crowd of anti-racist counter-protestors, killing one person and injuring nineteen – “domestic terrorists.”

Falwell responded by saying that Trump did call them “domestic terrorists,” which is not true. He later said, “I’m not sure exactly what his words were. But he never said it was not terrorism.”

Radditz asked about Liberty alumnus Chris Gaumer, who wrote on Facebook last week that he was “ashamed, embarrassed, horrified” by Falwell’s support for Trump’s comments.

Falwell said that Gaumer “completely misunderstands my support,” and that he was only referring to the parts of Trump’s comments that condemned racists as “bold” and “truthful.”

This morning, Trump said Falwell was “fantastic,” probably because he loves it when people publicly humiliate themselves out of loyalty to him.

Jerry Falwell of Liberty University was fantastic on @foxandfriends. The Fake News should listen to what he had to say. Thanks Jerry!