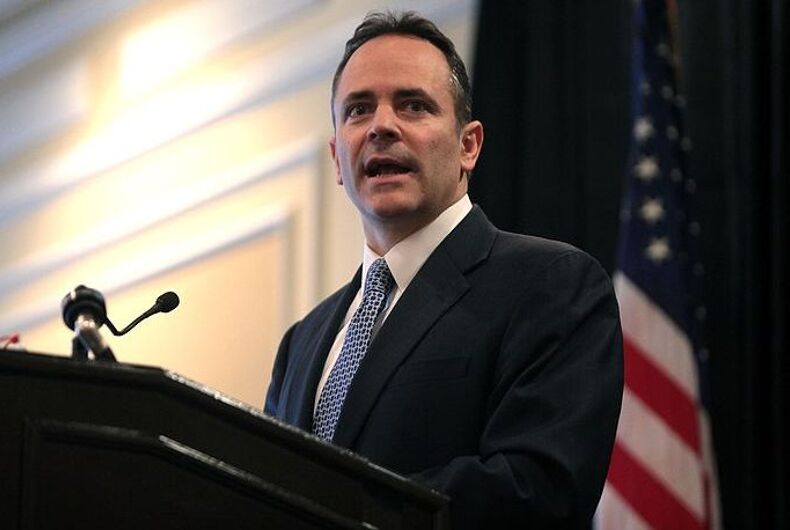 Kentucky Gov. Matt Bevin thinks he knows why the violence broke out in Charlottesville two weekend ago, and he’s not placing the blame on neo-Nazis and white nationalists. Instead he’s blaming taking the Bible out of public schools.

Bevin signed a bill in June encouraging public schools to offer “Bible literacy” courses. In a recent interview with West Virginia radio host Tom Roten, he reflected back on the gold old days of “a couple hundred years ago” when, he claimed, “in most instances the only textbooks that were in our public schools were the Bible.”

He said that removing the Bible from schools represents a “dangerous” attempt to “scrub history,” linking it to the removal of Confederate monuments from public lands, which he said he disagrees with, calling it a “sanitization of history.” He appears to denounce attempts to remove a statue of Roger Taney, a former Attorney General and the Supreme Court justice who wrote the Dred Scott decision. It has since been removed from the Maryland State House.

Luckily for those of us who were educated within the past hundred years or so, the use of textbooks have helped us to know and remember our history without the need for glorifying monuments in our public square.

Those comments are interesting, considering the bill he signed into law is ostensibly meant to be secular in nature, teaching only the Bible as literature, not as a moral and spiritual guide. That’s what churches are for, not public schools.