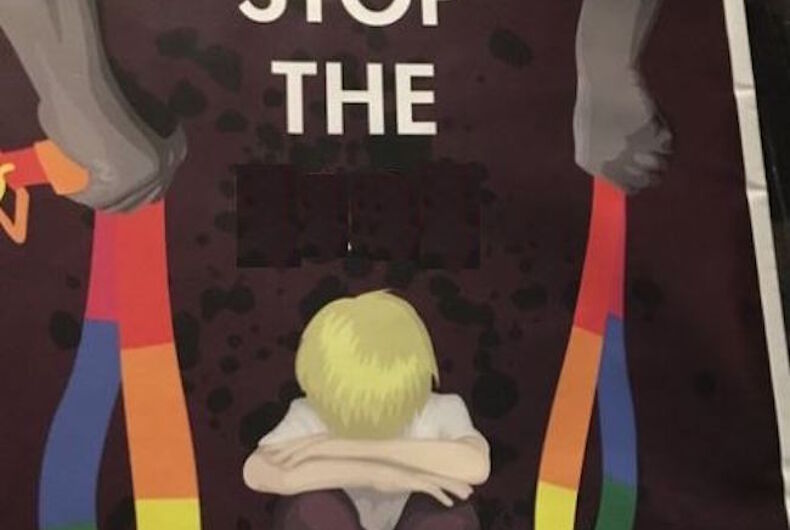 As predicted, Australia’s decision to waste money finding out what they already know, that the vast majority of citizens are in favor of marriage equality, is resulting in the spread of hatred.

Anti-gay posters went up in Melbourne over the weekend, and they are appalling.

Citing a thoroughly debunked “study” by a Catholic priest, one of the offending posters claims children raised by gay parents suffer from abuse, depression, and obesity. This is false.

“Overall, research evidence indicates that children raised in same-sex parented families do as well emotionally, socially and educationally as other children,” the government’s Australian Institute of Family Studies’ website notes.

What does hurt children? Bigotry like that on display with these posters.

“Children raised in same-sex parented families may be adversely affected by social stigma,” the Australian Institute of Family Studies continues.

Two similar posters were also spotted, reports Gay Star News. One shows a hazmat symbol in rainbow colors, and the other features another cowering child, with made up statistics about child molestation that seeks to push one of the oldest and most dangerous myths about gay people.

More posters were discovered in Brisbane that appear to come from a neo-Nazi group.

So it looks like the "No" campaign has the backing of actual nazis. pic.twitter.com/FZAGexrvgE

Labor leader Bill Shorten has criticized Prime Minister Malcolm Turnbull for his decision to hold the survey, and responded to the posters on Facebook, calling them “disgusting” and urging people to “make sure there’s an overwhelming ‘Yes’ vote in response.