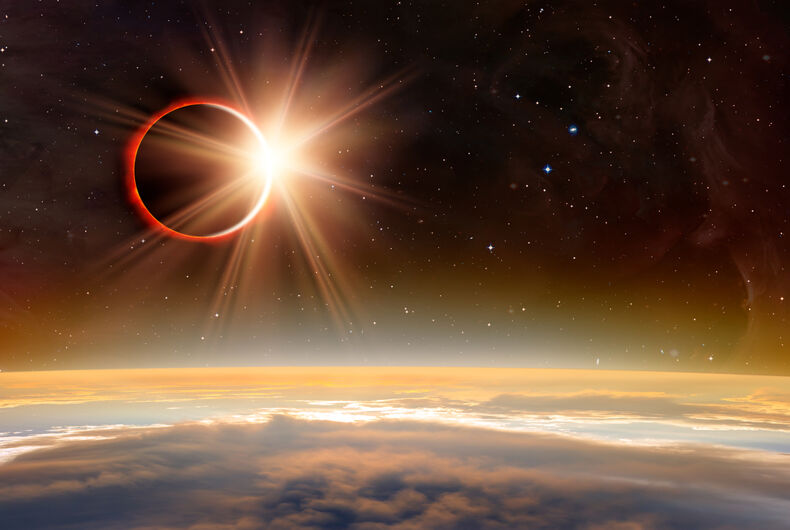 Disgraced televangelist Jim Bakker and the American Family Association’s Bryan Fischer both regularly decry “demons” and promote other superstitious beliefs like faith healing and other miracles, but when it comes to the full solar eclipse, they’ve started mimicking ancient religions. Both of the religious right leaders believe that the eclipse is a sign from God.

“The sun, if it is a symbol of anything, is certainly a symbol of God’s radiant truth, which is intended to reveal, to illuminate, and to enlighten every soul on planet earth,’ Fischer writes on Facebook. “The night, on the other hand, is a symbol of spiritual darkness, deception, and error.”

“The path of this total eclipse of the sun is remarkable, in that it crosses over the entire continental United States, almost perfectly bisecting America from the Northwest to the Southeast. And in that path, the sun will be perfectly blotted out, by the ruler of the night, plunging all of America in its path into virtual total darkness,” he continues.

“This is a metaphor, or a sign, of the work of the Prince of Darkness in obscuring the light of God’s truth. Satan, and those who unwittingly serve as his accomplices by resisting the public acknowledgement of God and seeking to repress the expression of Christian faith in our land, are bringing on us a dark night of the national soul.”

Bakker, who now hawks buckets of “End Times” supplies for believers to eat during the Apocalypse, goes even further with the theory that celestial events explained by science are actually signs from a deity manipulating nature to send a message to mankind during a segment with guest Mark Blitz. They go so far as to link the eclipse with a rainbow that appeared over Washington DC last week.

“You people that are mocking the prophets, you better be careful because God’s raised up the prophets to warn us and to teach us … I’m telling you, people, if you don’t know we’re in the Last Days, you’re so deceived.”

The ancient Egyptians, Babylonians, Mayans, and other civilizations all attached significance to celestial events like eclipses, shooting stars, and cloud formations. Both paganism and astrology assigned the movement of the stars and sun with supernatural meaning, but the practice is forbidden in the Bible.

Not that following the actual teachings of a peaceful, all-loving savior has ever been their strong suit, but one could be excused for assuming they’d embrace the strict rules of an authoritarian deity. Consistency, however, is meaningless to these charlatans.