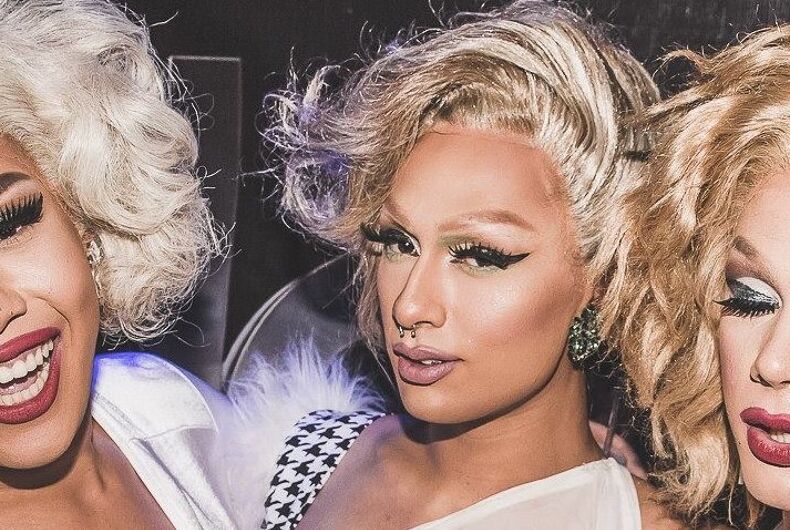 A gay man in Sydney, Australia, was being beaten by a group of straight men shouting homophobic slurs when a trio of drag queens named Ivy Leaguee, Coco Jumbo, and Vybe saved him.

“Those boys shit themselves, they weren’t ready for some drag queens on top of them,” Ivy said.

Ivan Flinn, 34, left a bar after midnight on August 6 on Oxford Street, the heart of the gayborhood in Darlinghurst, a suburb of Sydney, Australia. He went to a nearby kebab restaurant and walked in on some straight men yelling at drag queens.

The three queens who would later save Flinn were in the restaurant having an after-work kebab when a group of men started calling the queens homophobic slurs.

Flinn heard the verbal abuse. “There were heaps of homophobic slurs, ‘you fucking faggot, you queer cunt,’ all the slurs you can possibly imagine,” he told news.com.au.

One of the men turned to Ivy and called her a “freak.” She told local news, “I said, ‘I am a freak, I’m one of the freaks of Oxford Street, now get out of this shop.'”

“And then little Ivan walked into the middle of it,” Ivy said.

Flinn, an IT project manager, tried to make the rowdy men stop. “I said, ‘Dude, don’t ever use the word faggot and specially not on Oxford Street of all places.’”

He said one of the men went after him, tore his shirt, and punched him in the face, dislocating his jaw.

That’s when Ivy stood up to defend him. “I said, ‘You want to pick on little guys, you’ll need to fight the big freak. I’m a man underneath all of this, so let’s go.”

The fight moved outside as a man pushed Ivy and Coco jumped in to help her by throwing him “into the gutter.”

“I used to play rugby league. Plus I have an older brother,” Coco later recounted. “He tried to run away and I chased him into the oncoming traffic. I’m surprised my wig didn’t come off.”

Flinn, coming to his senses, saw that Ivy was now in the street dealing with the attackers. “After the punch I was stunned but the next thing I knew Ivy went in and was scrapping with the guy who punched me. They’re in the middle of the road, cars swerving around them, tooting, and I saw the guy rip her wig off.”

Ivy’s wig was destroyed, but she was still in heels by the end of the fight and only had minor injuries on her legs. “These big burly guys couldn’t even throw a punch, all they could do was pull hair and run.”

Three of the attackers were still around when police showed up, and they took their statements.

“Police are continuing to investigate the incident, including a possible motivation of homophobic bias,” a New South Wales Police spokesperson said.

Flinn is amazed by the three queens he calls “angels.” “I really thought I was going to die that night if he had kept punching me,” he said. “Drag queens are the strongest people in the LGBTI community. They stand there and say this is who I am and I’m proud.”

Flinn started a GoFundMe campaign to raise $1000 Australian (about $800 US) to replace the drag queens’ wigs, nails, and heels.

“I hope to replace my hero’s hair, ruined because of her good heart. To replace her nails, broken because of her courage. To get her new heels because she stood up for what is right.”

The campaign has already raised over $6000 Australian.

Coco said it was all in a day’s work. “It’s all just materials at the end of the day. There’s no use crying over split lace. We’re just glad Ivan’s OK.”

GL vs. BT: Are we a unified movement yet?