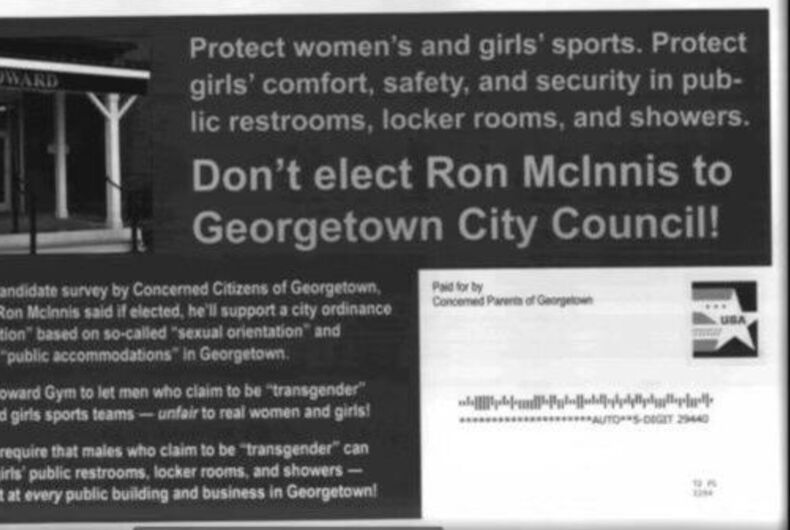 The flier sent to residents of Georgetown, SC accusing the Democratic candidate of being too friendly to transgender people.Photo: Screenshot

The Democratic city council candidate in Georgetown, South Carolina has been accused of being in favor of LGBTQ civil rights, but quickly moved to assuage any concerns by assuring voters that, quite to the contrary, he is most decidedly not.

Related: There are now some Democrats around the country backing anti-trans legislation

According to the Post & Courrier, McInnis responded to a questionnaire from Concerned Citizens of Georgetown asking if he supported “enacting a city non-discrimination ordinance protecting residents from employment, housing and public accommodations discrimination on the basis of race, ethnicity, sex, sexual orientation or gender identity.”

A group calling itself “Concerned Parents of Georgetown” mailed out a flier using the other group’s questionnaire results, but they insist the group’s aren’t related.

The flier says McInnis would “support a city ordinance prohibiting ‘discrimination’ based on so-called ‘sexual orientation’ and ‘gender identity’ at all ‘public accommodations.’”

“Does [my survey response] mean that I want to see transgender men in the bathroom … with little girls?” McInnis told the newspaper in response. “I did not sign onto that, no, that’s not what I meant when I said that.”

McInnis’ Republican opponent also said he would support the nondiscrimination ordinance. But at the bottom of the questionnaire, he added a note that said, “I am against biological males, who identify as female, using women’s restrooms or locker rooms or competing against females athletically.”

“The city of Georgetown has too many other things going on that we need to be working on than to bring this negative energy to our race,” McInnis said. “Because someone decided to take some negative stuff and put it on a piece of paper, they’re taking away from the growth of Georgetown.”

McInnis did not clarify why he viewed civil rights protections for vulnerable residents as “negative stuff” nor explain why he didn’t transgender people should be able to use a public restroom.

Teen charged with hate crime for trying to dismember, eat a man on their first date