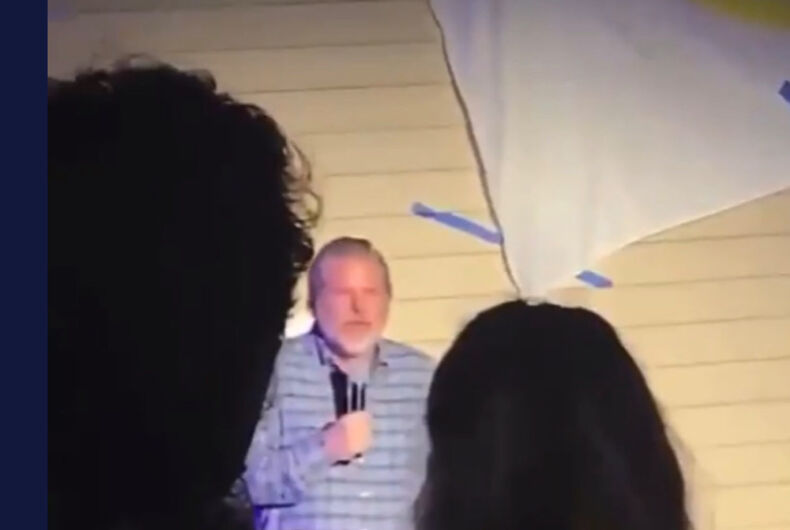 The latest turn has come in Jerry Falwell Jr.’s journey from influential evangelical leader of Liberty University to scandal-plagued symbol of Trumpism.

The school’s former president appeared at a event celebrating this year’s class of seniors. Falwell not only congratulated the graduating students, but told them, “I just want to invite all the seniors to my farm on May 8. We’re going to have the real Liberty graduation,” he claimed.

Related: The Jerry Falwell Jr. saga continues. But the real focus should be on Liberty University.

He then added, “if you’re not a senior but you date one, you can come, too.”

Lucas Wilson, a writer who posted the video of Falwell’s remarks online, also shared the video and details with INTO. The video has gone viral and the remarks have been reported in several outlets.

Last night Jerry Falwell Jr. showed up at a @LibertyU party and invited seniors to an end-of-the-year bash at his house, saying, “We’re going to have the real Liberty graduation.” 🤠🤠🤠🤠🤠🤠🤠🤠 pic.twitter.com/MCIWdxb5rg

Falwell’s appearance on campus since resigning last fall, and even suing the school, has been more recurring in recent weeks. The “farm” he’s inviting college students to is the property he resides on with his wife, Becki, which is just minutes from Liberty University’s campus.

Falwell’s repeated presence on the Liberty University campus has only fueled speculation that Falwell is trying to return to his former position at the school, which he left after a series of sexual and financial scandals. That speculation remains, although now Liberty University is suing Falwell for over $10 million.

“Less than a year ago, [Jerry’s] wife Becki Falwell was accused of sexually preying on a student, and both Falwells were accused of joking about students they would like to have sex with. @LibertyU has not addressed either allegation,” alumni group Save 71 wrote on Twitter.

The group said that the event was a gathering for a comedy show, and students and their families were in attendance. Falwell was reportedly not scheduled to be at the event or announced in advance, according to attendees. He also told the crowd that his own daughter is “probably so pissed at me right now” because she begged him, “please don’t come.”

“Falwell appeared visibly intoxicated, but he didn’t get the drinks from the party,” Save 71 stated. Liberty University students are not allowed to drink alcohol.

Falwell reportedly told the audience that he would hold the event on May 8, as long as his wife Becki, who was also in the audience, approved. “Becki says there’s no way we can plan it that fast, but we can and we will,” Falwell said.

He then asked those in the audience to spread the world on social media. “We gotta move quickly,” he said.

Falwell didn’t deny that he’s planning to hold the event. He told Religion News Service that the “real graduation” quip was meant as a joke.

“I just want to thank the students because they’ve shown me so much love through all this ordeal. Everywhere I go, they’re so forgiving. They’re so loving. And I want to reciprocate by having them out to my farm,” he said.

“I got a bunch of students that I love and that love me, and I’m going to do it. I don’t care whether anybody likes it or not,” he defiantly stated.

Less than a year ago, his wife Becki Falwell was accused of sexually preying on a student, and both Falwells were accused of joking about students they would like to have sex with. @LibertyU has not addressed either allegation.@JerryPrevoLU do you want to address them now?

Jerry and Becki must live off the life force of college students.

In reality, this is an old guy showing up and telling college kids to come to his house to party.

That’s creepy in and of itself, but considering what he and Becki have done.. feels like preying on students. https://t.co/nIc1UN2ppz

Mike Pence is declaring he’s “had enough” of Biden administration. But no one’s listening.