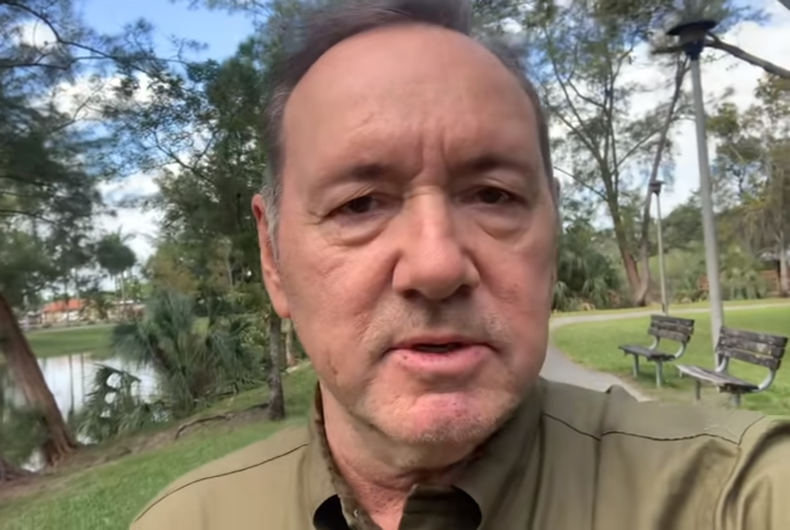 Kevin Spacey speaking to the camera in his "1-800-XMAS" video.Photo: Screenshot

For the third year in a row, now-disgraced actor Kevin Spacey took to YouTube to release a video message for his fans on Christmas Eve.

The 61-year old released a video named “1-800 XMAS,” raving about how so many people he know struggled through 2020 to the point that they contemplated suicide. He shares that this encouraged him to speak up in hopes of reaching anyone else who may feel that way, and encourage them to “please, please do not take that step.”

2018’s message hinted at his then-upcoming legal battles. Spacey portrayed Frank Underwood, his character from Netflix’s House of Cards, who was killed off after members of the show’s production team came forward with accusations of sexual harassment against Spacey.

“I showed you exactly what people are capable of.[…] And you trusted me. Even though you knew you shouldn’t,” Spacey monologued.

“Soon enough, you will know the full truth.”

In 2019, Spacey once again reprised the Frank Underwood character, sitting in front of a churning fireplace as he went on about how he wanted “to cast my vote for more good in this world” going into 2020.

“Ah yes, I know what you’re thinking – could he be serious?… I’m dead serious,” Spacey said.

“The next time someone does something you don’t like, you can go on the attack – but you can also hold your fire, and do the unexpected,” Spacey lectures the viewer. “You can …kill them with kindness.”

This year, the actor decided to drop the Frank Underwood character, delivering the monologue as himself. This time, the video opens with the camera panning to Spacey, sitting in a park, alone on a bench.

“What would Christmas Eve be without a message from me?” Spacey repeatedly boasts.

Shortly, he grabs the continuously-shifting camera, holding and walking with it while recording the rest of his two-and-a-half minute rant.

Then, his speech takes a more serious turn. “A lot of people have reached out to me this past year and have shared their own struggles,” he says.

He makes the expected hint at his own legal and image troubles, saying, “my ability to be there for them has really only been possible because of my own difficulties.

“And while it’s been a privilege to offer support, I have to say frankly it’s also been beyond my abilities and it’s bigger than me,” he continues. “To all those out there who might be suffering, it gets better, it does get better,” he pledges.

At the end, black title cards show the phone numbers to the National Suicide Prevention Lifeline, then the Substance Abuse Mental Health hotline.

It’s the latest turn out for Spacey in his post-scandal life, as he tries to hold on to the remnants of a once monumental career. The Academy Award-winning actor — known for films The Usual Suspects (1995), L.A. Confidential (1997), American Beauty (1999), and Recount (2008) — once starred as the lead character in House of Cards, which was Netflix’s first original programming in television. Prior, he was the Artistic Director of London’s renown Old Vic Theatre.

It all came apart, starting in 2017, when several men came out and alleged that Spacey had sexually harassed or assaulted them as children or teens, in allegations going back to the 1980s. Out actor Anthony Rapp was chief among them.

Netflix quickly dropped him from the final season of what was one of their top shows at the time, and Spacey faded into the background over time. Other than a poetry reading in mid-2019, Spacey has not taken any creative opportunities and has yet to recapture the public’s attention — except, on the last three Christmas Eves.

The criminal litigation for Spacey have since cleared up, with one allegation dismissed after the accuser ‘pleaded the fifth’ on the stand. Another proceeding suddenly ended when the plaintiff died right before the case was set to go to trial.

However, Spacey is not entirely clear. He’s still facing a lawsuit from Rapp and another accuser for his alleged sexual assaults.

If you or someone you know in the United States needs help, know that you’re not alone. You can call the National Suicide Prevention Lifeline at 1-800-273-8255. If you need help with substance use or related mental health issues? In the U.S., call 800-662-HELP (4357) for the Substance Abuse and Mental Health Services Administration Helpline.

Systems need to change in the U.S. to fight inequity. Is Joe Biden up to the task?