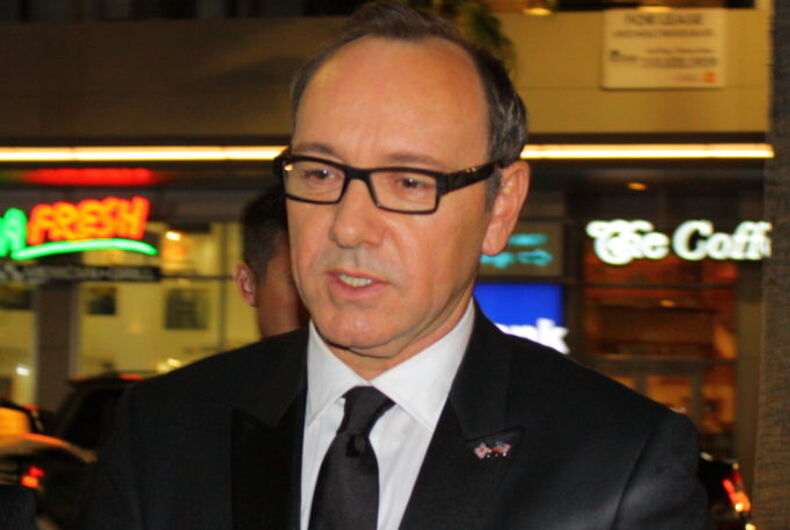 Kevin Spacey released a strange video about the sexual assault and harassment accusations against him as he is set to be arraigned.

Spacey is being charged with indecent assault and battery in Nantucket, Massachusetts, for allegedly assaulting the then-18-year-old son of news anchor Heather Unruh in 2016.

“I’m pleased that the case is moving forward in the judicial system,” Unruh said.

Unruh came forward last year, saying that Spacey had assaulted “a loved one.”

At a press conference, she said that the loved one was her son.

“The victim, my son, was a star-struck, straight, 18-year-old young man who had no idea that the famous actor was an alleged sexual predator or that he was about to become his next victim,” said Unruh. “This was a criminal act.”

According to court documents, the teen said that Spacey bought him eight to ten drinks at a bar and grabbed his genitals.

The alleged victim sent someone a Snapchat video of the groping while it was happening. While the video has been deleted, the person who received it confirmed the content.

Several other witnesses said they saw the alleged victim and Spacey together at the bar. One described the teen as “pale, blank, a bit frightened.”

After the teen left the bar, Spacey texted him, “I think we lost each other.”

“If a woman who saw what happened didn’t tell [the alleged victim] to run while Spacey got up to go to the bathroom, I don’t even want to think about what would’ve happened,” Unruh said last year when the accusation was made public.

Shortly after the Boston Globe reported on the charges, Spacey released a video on Monday where he speaks as Frank Underwood, his character from Netflix’s House of Cards who was killed after members of the show’s production team came forward with accusations of sexual harassment against Spacey.

In the video, Spacey-as-Underwood said, “I showed you exactly what people are capable of.[…] And you trusted me. Even though you knew you shouldn’t.”

“Soon enough, you will know the full truth.”