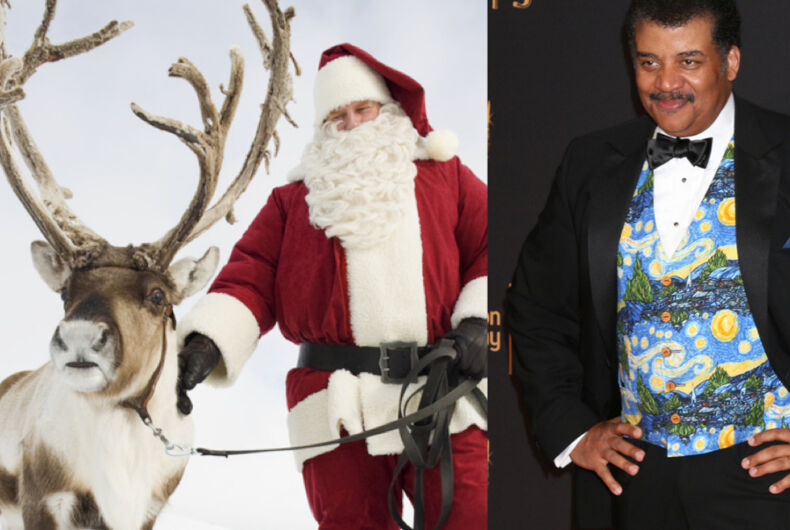 Neil deGrasse Tyson (right) and Santa with one of his reindeer (left)Photo: Shutterstock / LGBTQ Nation Composite

Leave it to an astrophysicist to take down another part of the mythos around Santa Claus.

Neil deGrasse Tyson, the Director of the Hayden Planetarium and television personality known for shows on PBS and National Geographic, had a realization about Saint Nick’s reindeer that he couldn’t help but share in a tweet.

Related: Pride celebrations were held together on the North & South Poles for the first time

“So Santa’s reindeer, which all sport antlers, are therefore all female,” Tyson concludes, “which means Rudolf has been misgendered.”

Both male & female Reindeer grow antlers. But all male Reindeer lose their antlers in the late fall, well-before Christmas.

So Santa’s reindeer, which all sport antlers, are therefore all female, which means Rudolf has been misgendered. pic.twitter.com/fkHqhJM7dY

Besides initially misspelling beloved red-nosed reindeer Rudolph’s name, Tyson’s analysis appears to be correct. In fact, it’s not a brand new revelation: a 2017 article in LiveScience deemed that Arctic scientists say it’s “impossible” for Santa’s reindeer to be male.

“Sounds like Rudolph and the gang were all gals,” they wrote.

Still, there were many on Twitter that tried to find any way to try and hang on to their childhood-old notion that the reindeer were males.

Some pointed out that maybe Santa just kept castrated males, so they could keep their antlers longer. “Most of the reindeer used to pull sleds are castrated males which make them easier to handle, and have antler cycles similar to those of the females,” one tweet read.

A reply then pointed out, “then there wouldn’t have been the reindeer marriages and baby reindeer we see.” Someone else then added, “Reindeer marriage is likely complicated. They aren’t monogamous.”

Another reply included an image of a reindeer’s (animated) backside, adding, “he’s onto something.”

Finally, Tyson added his remarks on the matter again. “Nice bit of info. Thanks,” he wrote.

“But now you force us all to imagine Santa castrating Rudolph.”

Nice bit of info. Thanks.

But now you force us all to imagine Santa castrating Rudolph. https://t.co/QFhMmFw5oq

I’m as confused as you are as to how/why North Pole reindeer culture adopted a nuclear family model, but there is no reason to assume a husband reindeer is a dependent reindeer’s biological father.

Outside of that one, more elaborate, theory, people started to realize and actually accept the science, as laid out by scientists. Who would’ve imagined that happening toward the end of 2020?

And despite the objections likely rooted in attempts to cling to tradition, it’s likely that female reindeer “might have the edge” in trips through the Arctic, the 2017 article explains.

Still, some had to say something about Tyson coming through with facts for everyone’s joyous Christmas weekend. Fittingly, one person could only muster to add: “Geek.”

Tyson replied, “thanks for the compliment!”

Thanks for the compliment !

At the very least, this revelation may change some things, including the view that “Rudolph the Red-Nosed Reindeer” has been a story about being gay for so many years.

Tyson’s tweets about Christmas weren’t all Scrooge-worthy against holiday traditions. He also let his followers know that Santa is a smart cookie for choosing Rudolph to lead his sleigh, because red is best for foggy nights (he later admits that yellow is also close.)

Tyson also ponders a potential theory to how Santa can fly around the Earth in supposedly-impossible fashion. “Maybe… it is we who fly past them on Christmas Eve,” he hypothesizes.

Maybe Santa’s Reindeer are stationary, and it is we who fly past them on Christmas Eve.