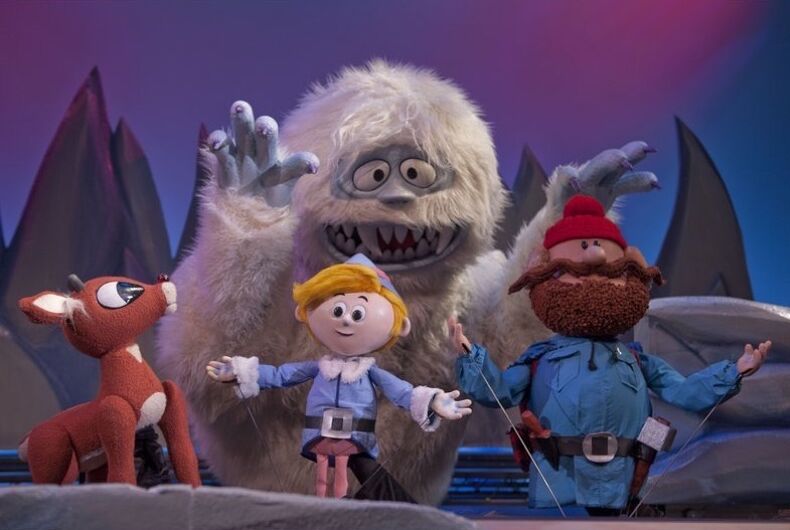 Rudolph the Red Nosed Reindeer and the gang of misfitsPhoto: screenshot

Okay, so what’s one of the mainstay traditions of the holiday season? Watching “Rudolph the Red-Nosed Reindeer” of course! Debuting 52 years ago, “Rudolph” is one of the last survivors of the great Christmas TV specials of the ‘60s and ‘70s.

And deservedly so! While some parts of the show are dated (“Christmas Seals,” “This is man’s work!”), the overall message of inclusion and acceptance of those who are different resonates even now – perhaps even more so today.

In recent years, the LGBT community has come to see the story of Rudolph and his misfit friends as an allegory for our own struggle for inclusion, acceptance, and equality. Last week, we posted links to a couple of stories that explore that deeper meaning. “Revealed: The obvious gay subtext of ‘Rudolph the Red-Nosed Reindeer’” is an awesome dive into the hidden gay meanings of the show. And, on “The Sewers of Paris” podcast, Jonathan Renteria-Elyea discussed how important the show’s songs were to him as a gay kid.

But maybe there was more than just a presumed LGBT meaning to the show. Maybe there was a deliberately placed lesson that we’re seeing the benefits of today.

I’ve always wondered if the LGBT subtext we read into Rudolph, Hermey, and the Island of Misfit Toys was intentional on the part of “Rudolph’s” creators – and if, in fact, “Rudolph” is the first TV show to promote inclusion and acceptance of the LGBT community by straight people.

Look at what happens in the show: “misfits” who are unable or unwilling to fit in to typical society face overt discrimination, bullying, and shame from their families and society at large for simply being who they are.

But, by the end of the show, the misfits are welcomed back and accepted. As Burl Ives’s narration says, the inhabitants of Christmas Town “realize they were hard on the misfits.” Everyone learns that “non-conformity” is not a bad thing; misfits have a lot to offer as well and should be treated as such.

That’s a pretty bold lesson for 1964. “Rudolph” aired at the pinnacle of the civil rights movement and well before the anti-Vietnam War protests, the Summer of Love, Stonewall, Woodstock, and women’s liberation. The idea of conformity to social norms was still overwhelming – and there weren’t a lot of people sticking up for those who didn’t fit into conventional life.

So who was primed to not only hear that message but quickly internalize it? Kids. Kids who have a very strong sense of fair play and hadn’t been taught real prejudice yet. Kids who don’t see anything wrong with someone who’s different from them.

And what kids saw “Rudolph?” Well, from it’s debut in December of 1964 to today, it’s been seen by the youngest of the Baby Boomers, Generation X, and the Millenials – the most LGBT-friendly generations in American history.

So is it possible that a kids’ TV show with a message of acceptance and inclusion for those who are different – including numerous characters with a big gay subtext – gave kids their first lesson that LGBT people are not to be shunned and feared but loved and accepted?

It’s certainly possible. We’ll likely never know for sure. But TV creators in the ‘50s and ‘60s were very good at sneaking in political and social commentary without being overt. This might be one more example of a then-radical message hiding in plain sight.