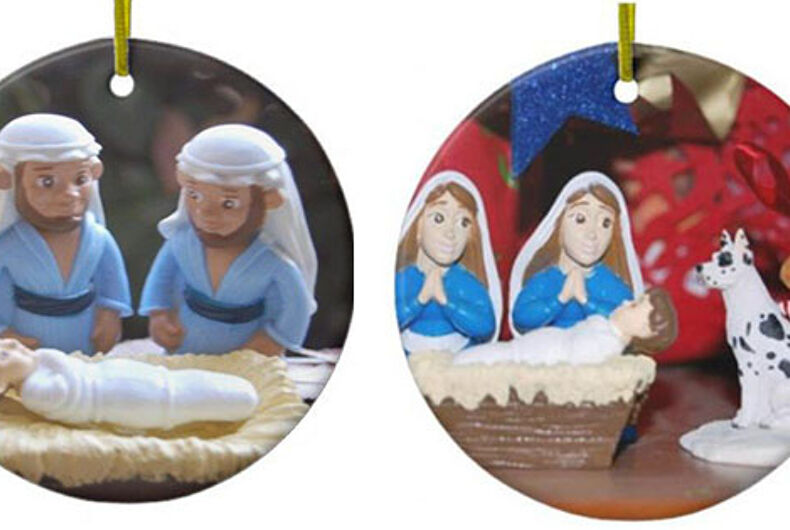 Editor’s note: this story has been updated to reflect new information. The ornaments are once again available for purchase.

Two pro-LGBTQ Christmas ornaments that were removed from an online marketplace after criticism by a notorious antigay group can be yours, just in time for the holidays.

The group, “Christian Concern,” is based in the United Kingdom. A statement by the group attacked the artists selling the ornaments of “blasphemously” trying to “normalize behavior” through their art.

Earlier this week, Mark Thaler of Pride and More stopped selling the Christmas tree decorations — one with two Josephs standing over the manger of the baby Jesus, and another with two Marys, praying over the Christ child. But according to the creator of the nativity scenes, Kittredge Cherry, they are once again available on her “Jesus in Love” page of Zazzle, for just under $19 each.

“These decorations are a desperate and ridiculous attempt to pretend that homosexual relationships are pure and holy.

‘They blasphemously portray the Lord Jesus being parented by a homosexual couple. What depths will the LGBT lobby stoop to in order to try and normalize their behavior?”

“God’s design is for children to grow up with a male and a female parent. The Lord Jesus was parented in this way, and this is what is best for children.

“The LGBT lobby is not interested in the welfare of children but only in pursuing its own selfish agenda. Trying to rewrite the Christmas story is their latest self-deception.”

Thaler defended his work, telling the paper:  “Not everyone’s viewpoints are the same. People need to coexist and not judge one another. It’s just an image. They need to focus on themselves and not worry about what everyone else is doing.”

Thayer sells many other pro-LGBTQ items online. You’ll find them by clicking here.