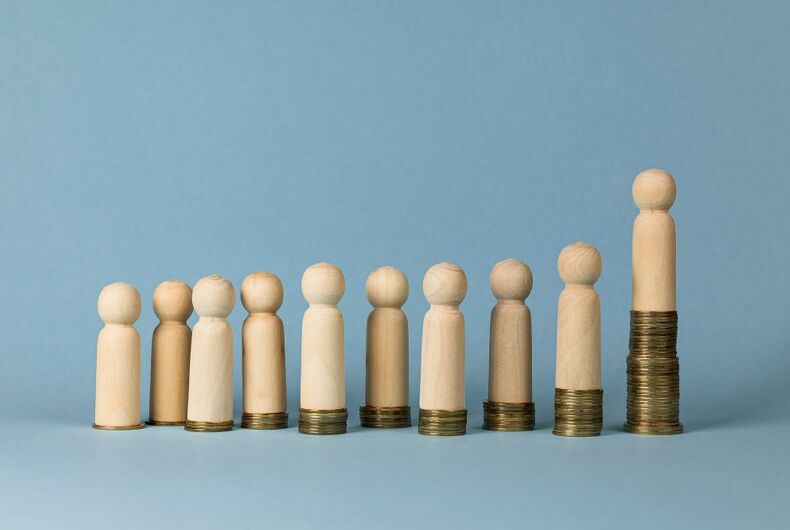 The United States of America, as expressed in the stirring words of the Preamble of its great Constitution, was founded “in order to form a more perfect union, establish justice, insure domestic tranquility, provide for the common defense, promote the general welfare, and secure the blessings of liberty to ourselves and our posterity…”

In times of great crises, through effective partnerships between government, business, industry, the public, and with our allies, the country mobilized its human and economic resources “for the common defense” and “general welfare” to alleviate a great depression, defeat the massive forces of European fascism, and stand up to Soviet authoritarian expansionism.

Related: Indiana wants to make it harder for trans people to get drivers’ licenses

Following the successful launch of the Soviet satellite Sputnik in 1957, and in 1961 with Yuri Alekseyevich Gagarin’s historic milestone achievement as the first human to journey into outer space in his Vostok 1 capsule, the United States marshaled its efforts and jumped full force into the space race, resulting ultimately in landing humans on the Moon’s surface and safely returning them to planet Earth.

And through these great mobilizations, the country progressed in ways unimagined when first setting out to find solutions to specific problems.

With the partnership between the British government and the pioneering work of the mathematician and cryptologist Alan Turing and his team who invented a successful computer system breaking the Nazi’s “enigma” code, they shorted the war and saved potentially millions of lives in the process. And with their efforts, the field of computing established a foothold saving countless future lives while making life easier for so many.

We can see the results of the mobilization during the current crisis in the successful formulation and the continuing distribution of two initial vaccines and more on the horizon in the partnership between government and industry in attacking the Coronavirus, the most widespread and deadly world health crisis since the viral outbreak in 1918.

When systems and policies connect with the will of government, the private sector, and the people, this great organ we carry as humans between our ears can achieve great things to make real the noble words of the Preamble to our founding document.

Government systems, policies, and partnerships determine the extent and depth of social inequalities as well as the elimination of these Inequalities. Unfortunately, the government of the United States and the people through their elected officials seldom if ever consider the Preamble or act on it.

Poverty exists in epidemic proportions in the United States because we as a nation have chosen systems to expand poverty.

Homelessness exists in epidemic proportions in the United States because we as a nation have chosen systems to increase homelessness.

Food insecurity exists in epidemic proportions in the United States because we as a nation have chosen systems to deepen food insecurity.

Climate change exists in large scale proportions in the United States because we as a nation have chosen systems to promote climate change.

The massive wage and wealth gap increases exponentially in the United States because we as a nation have chosen systems to increase the gaps.

Poverty, homelessness, food insecurity, climate change, the wage and wealth gap, social and economic inequalities of every type exist not because some people individually decide to oppress someone else, to limit their chances for success.

Poverty, homelessness, food insecurity, climate change, the wage and wealth gap, social and economic inequalities of every type exist not because some people individually decide they want to “game” the system, to live off others, not to work or work below their ability levels.

The root of the inequalities in the United States and many other nations rests on a foundation, a system, of patriarchal white supremacy benefiting from so-called laissez-faire “free market” capitalist economics.

“Laissez-faire” (French for “leave alone” or literally, “let you do”), an economic theory arising in the 18th century, opposes any governmental intervention or regulation of the private business sector. Within this system, the government “leaves alone” business to “let it do” what it needs to do to allow a so-called naturally occurring order of economic competition to rule.

And, as we have seen, as business has controlled its “own” affairs, the inequities in the system have only expanded while negatively impacting those who have little or no access to the means of production, of ownership.

The definition of “insanity,” credited to Albert Einstein, refers to doing the same thing over and over and expecting different results.

I define a corrupt and criminal economic system as the rich doing something over and over and expecting the same results.

By lobbying for and gaining less regulation (as well as deregulation of those previously imposed), business and industry increases its wealth and power to the detriment of everyone else.

Unfortunately, with all the good intentions they will carry into the White House, the new Joe Biden/Kamala Harris administration, even with the excellent Cabinet and advisors they are formulating and even if they turn the U.S. Senate blue, will never have the ability of going very far to make “a more perfect union.”

Oh, the new administration most likely will be able to reverse some of the damage wrought by the Trump regime on the nation and its vital institutions. But no amount of hand sanitizer – or election of well-meaning politicians — will kill the infection of mass inequality in our country unless and until we choose different economic and social systems of governance.

It is a national disgrace that some people live in multimillion dollar homes in gated communities, and many people own two, three, four or more homes as the homeless population ever increases.

It is national disgrace that in the United States, the richest country in the world, millions of people go without quality healthcare or are unable to put a roof over themselves and their families or food on their tables, while large business owners complain that providing a livable wage and benefits to their workers would undercut their enormous and ever-increasing profit margins.

We must demand a system that enacts and not merely proclaims “to establish justice, insure domestic tranquility, provide for the common defense, promote the general welfare, and secure the blessings of liberty to ourselves and our posterity…”

This will require a different economic system, one that provides universal government sponsored healthcare, one that establishes a real and effective graduated income tax system devoid of loopholes, one that creates and maintains sustainable government partnerships with the business and working sectors of the nation.

We must scrap a failed and inequitable “post-liberal” system centering on a market-driven approach to economic and social policy, including such tenets as reducing the size of the national government; severely reducing or ending governmental regulation over the private sector; privatization of governmental services, industries, and institutions including education, healthcare, and social welfare; permanent incorporation of across-the-board non-progressive marginal federal and state tax rates; and possibly most importantly, market driven and unfettered “free market” economics.

Attempting to repair or reform around the edges of the current system within the crisis of inequality does not work and has never worked to eliminate the vast inequities. No more “laissez-faire” but, rather, let us truly attempt to “establish a more perfect union.”