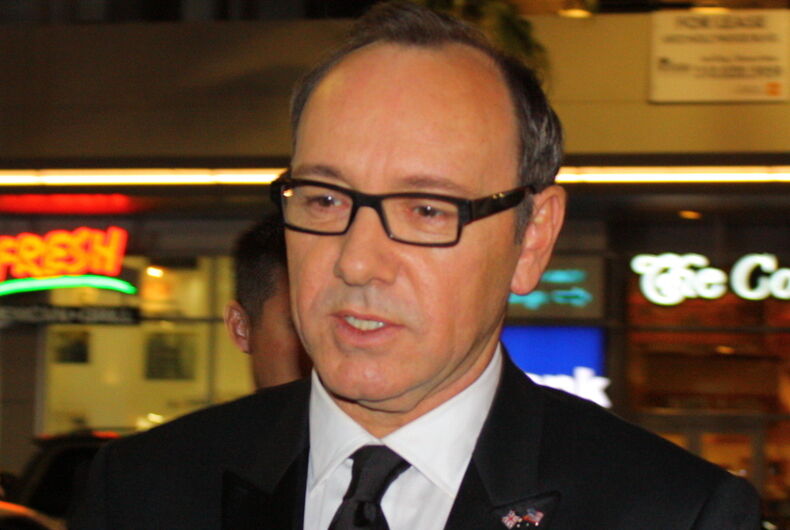 Two years after being accused of sexual misconduct by Anthony Rapp and a bevy of other men, Kevin Spacey made his first public appearance on Friday evening, performing a dramatic reading of Gabriele Tinti’s poem “The Boxer” at Rome’s Palazzo Massimo alle Terme museum.

Spacey read the poem to a crowd of 150 in front of the bronze nude statue known as “Boxer at Rest.” The poem itself was penned by a 39-year-old Italian poet who has been composing rhymes inspired by famous statues.

Related: Anthony Rapp: ‘I was trying to protect people’ with the Kevin Spacey allegations

In the poem, which can be heard in full in the video below, a boxer self-aggrandizes while lamenting his treatment by an audience hungry for spectacle.

Some lines from the poem include:

“The more you’re wounded the greater you are. And the more empty you are. They used me for their entertainment, fed on shoddy stuff…. I have endured no end of sleepless nights. I have spent hours and hours sweating, to destroy and fall…. I shook the country, made the arenas vibrant, tore my opponents to shreds, I lit up the darkness, collected insults, compelled applause…. On the other hand, life is not frightening for those who have never taken a risk. Who can understand? Who can I speak to?”

Here is video of Kevin Spacey’s reading of “The Boxer”:

It’s obvious that Spacey wants to mount a comeback into the public eye after his public disgrace and his concurrent coming out as a gay man — a move which was criticized by fellow actors. By delivering a brief dramatic performance among everyday museum-goers in Italy, Spacey could make a good showing while avoiding the jeers, scandalous questions and potential embarrassment that might await such a show in the United States.

Last Christmas, Spacey released a bizarre video in which he spoke as Frank Underwood, his character from Netflix’s political drama House of Cards and lamented his “impeachment without a trial.” In the video, he said, “We’re not done, no matter what anybody says. And besides, I know what you want — you want me back.”

He continued, “You wouldn’t believe the worst without evidence, would you? You wouldn’t rush to judgment without facts, would you? Did you? … I’m certainly not going to pay the price for something I didn’t do. Oh of course they’re going to say I’m being disrespectful, not playing by the rules. Like I ever played by anyone’s rules before. I never did, and you loved it.”

While multiple men accused Spacey of sexual misconduct — including Richard Dreyfuss’ son who claimed that Spacey fondled him in front of his unaware father — only one man pressed criminal charges. He subsequently dropped them after refusing to testify and losing a cell phone that might’ve contained evidence.