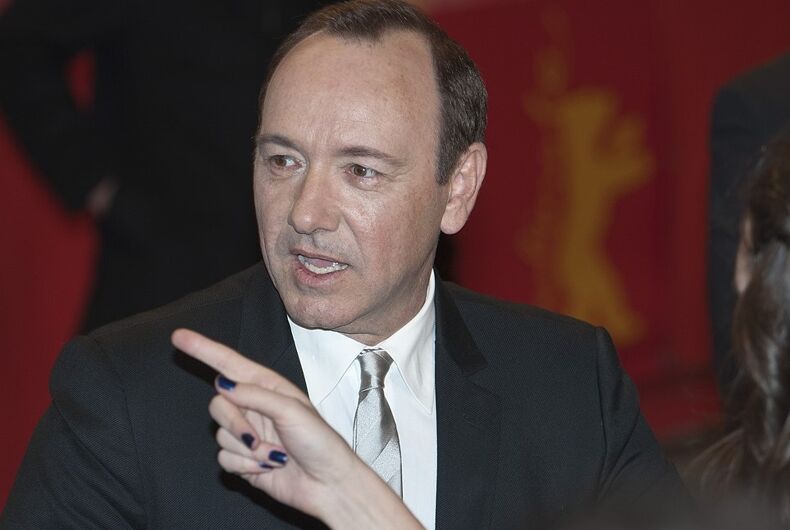 In response to an allegation that he made an unwanted sexual advance to a 14-year-old when he was 26, Kevin Spacey came out as gay.

It’s hard to see the connection. Spacey wasn’t accused of being gay, he was accused of behavior that’s wrong no matter his gender or sexuality.

At best, his coming out is an intentional distraction from Anthony Rapp’s story. At worst, he’s implying that he can’t help himself: fondling teens is just something that gay men do, perpetuating the myth that LGBTQ people are all child molesters.

People on Twitter were quick to point out that this isn’t right.

Kevin Spacey has just invented something that has never existed before: a bad time to come out.

Well done Kev. You stay silent on your sexuality until the time comes when you can conflate it with an alleged sexual assault on a minor.

No no no no no! You do not get to “choose” to hide under the rainbow! Kick rocks! https://t.co/xJDGAxDjxz

Nope to Kevin Spacey's statement. Nope. There's no amount of drunk or closeted that excuses or explains away assaulting a 14-year-old child.

Media: "Kevin how do you respond?"

F**k you Kevin Spacey. Nice work in playing into the homophobes’ playbook – equating being gay with an interest in 14 year olds. Sick f**k.

Good morning to everyone except Kevin Spacey, who has thrown the gay community spectacularly under the bus to distract from his own badness.

Oh wow. Kevin Spacey deflecting from attempting to molest a child by coming out as gay is the absolute pits.

hello kevin spacey, "i was drunk and gay" is an excuse for like, table-dancing to britney spears, not attempted paedophilia

(Kevin Spacey beats a man to death with an accordion)

“I’m sure you’ve heard the rumors. They’re true. I am indeed an accordion player.”

Kevin Spacey comes out as gay after sexual assault allegation