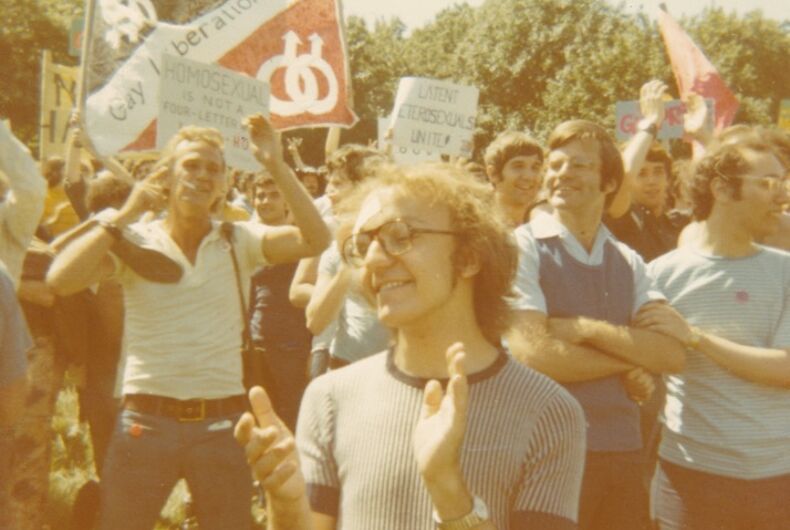 Are American LGBT activists becoming more engaged in wider social justice issues than they have been in many years? I am hearing more about this trend and applaud it strongly.

From new groups like Gays Against Guns to the proud appearance of rainbow flags at anti-Nazi rallies following the incident in Charlottesville, LGBT activists are reaching out to support many progressive causes outside of traditional, narrowly defined core LGBT agendas.

Certainly the widespread horrors of the Trump presidency have inspired many to broaden their activism. But I also sense a growing wave of moral maturity within a new generation of LGBT youth who have personally benefited from the progress of the last 50 years. They know they are people of value. Their feet are firmly planted in a belief in human justice and they want to reach out to improve the world.

Today’s multi-issue activists will be pleased to learn that the modern LGBT movement began with much the same sense of involvement in a broad range of social-justice causes. Although spurred by the rebellion at Stonewall in June of 1969, the activists who founded the pioneering Gay Liberation Front in New York City only three weeks later came from a wide variety of that era’s progressive movements — women’s liberation, the anti-war movement, the new left and the black civil-rights movement, among others — and they gave vocal support to the Black Panthers, Young Lords and other radical organizations of those years.

Like gay liberation itself, I was a child of the ’60s. When I joined GLF in New York in late 1969, I’d already been active in the anti-war movement at the University of Wisconsin-Madison. I’d experienced more than my share of leafleting, street actions, tear gas and sit-ins. I’d protested the presidential campaign of Gov. George Wallace when he appeared in Wisconsin. I’d joined more than 10,000 UW students and faculty marching to the State Capitol Building following the assassination of Dr. Martin Luther King, Jr.

This was the same shared background of most of the young gay and lesbian activists I came to know so well in my two years as a core member of GLF. No surprise then that, when GLF sprang onto the New York scene as the first gay and lesbian organization of the modern LGBT-rights era, none of us abandoned our passion for the groups we came from.

Yes, with our iconic slogan, “Out of the closets and into the streets,” GLF took immediate aim at the specific antigay forces that surrounded us.

Within the first few months, GLF protested against police raids on mafia-owned bars, picketed negative media, railed against church and psychiatric bigotry and began publishing our pioneering radical newspaper, “Come Out!” And before the first year was out, we achieved what was probably our most important accomplishment — creating an all-new “out and proud” gay and lesbian community that had not existed before us.

We did this through our continual protests and public presence, Sunday night meetings, all-gay and women’s dances, consciousness-raising groups, gay living collectives and through our central role in organizing the first gay pride march in June of 1970.

Nonetheless, from the very start, GLF also reached out to other causes. We defined ourselves as part of the progressive revolution dedicated to transforming American life in the 1960s and ’70s. Diversity was a hallmark of GLF membership and from the beginning we counted among us male, female, white, black, Latino, Asian and trans members.

We proudly carried our GLF banners at many peace marches on the streets of Manhattan. We bussed to attend large anti-Vietnam War moratorium events in Washington, D.C. In November 1969, GLF voted to donate meager organization cash to support the “Free the Black Panther 21” appeal.

In May of 1970, lesbians from GLF pulled off the famous “Lavender Menace” action challenging the homophobia of the National Organization for Women. Groups of GLF members joined the socialist-inspired Venceremos Brigade, and travelled to Cuba to help agricultural workers cut sugar cane. We attended the first Earth Day celebration on April 22, 1970.

For my own part, in August 1970 I was among several GLF members who met with Huey Newton to discuss joint demonstrations between GLF and the Black Panthers. Later that year, I joined more than 100 GLF members and participated in sessions of the Black Panther Party’s “Revolutionary People’s Constitutional Convention” held in Philadelphia and Washington, D.C., where members of our black and third-world alliance group presented a multi-point program of LGBT inclusiveness.

Subsequently, I joined several other gay men in the creation of the Effeminist movement — dedicating several years to supporting feminist goals to oppose sexism and male supremacy summarized in our much-republished position document, “The Effeminist Manifesto.” These alliances did not always lead to concrete achievements, but they effectively expressed the intentions of GLF members towards a just and humanistic world vision.

Sometimes this diverse program was controversial.

Despite their own sympathies with civil rights and other causes, some early GLF members felt that our support for other progressive groups was a distraction to achieving central LGBT goals. After GLF’s November 1969 cash donation to the “Free the Panther 21” appeal, some GLF men were so opposed that they left GLF and formed the Gay Activists Alliance (GAA), with the express purpose of concentrating only on specific gay-related actions.

GAA went on to many important achievements, campaigning publicly for gay-rights issues within both the city and state of New York. They founded a very successful gay community center at a firehouse in lower Manhattan. However, they consistently maintained a policy of gay-only politics and generally refrained from joint demonstrations with non-gay groups or causes.

In many ways, GAA set the tone for other early LGBT groups that followed in the late 1970s, including the National Gay Task Force and the Gay Rights National Lobby.

While for tactical reasons, some of these gay-only organizations played important roles in agitating for gay and lesbian visibility and rights, I always felt a frustration in their narrow focus. Why could we not reach out to be a part of other progressive causes, maintaining strong alliances with other agents of social change?

The broad political agenda of GLF had not seemed to interfere with its solid achievements of formulating a new politics around LGBT oppression and inspiring the formation of hundreds of additional gay-rights groups in the U.S and Europe within the following two years.

When GLF disbanded as a functioning group in early 1972, I think its demise had less to do with any failure on its part, but rather was a result of its success. As an almost archetypal “umbrella organization,” it had attracted participants from every stripe of LGBT identity and interest.

It then acted as a centrifugal force, spinning off a rainbow of successor organizations, including GAA, Radical Lesbians, Street Transvestite Action Revolutionaries (STAR), the Effeminists, the Black and Third World Caucus and others that went on to influence the next 50 years of LGBT activism.

Today’s concept of “intersectionality” would be no stranger to early GLF activists. Despite the abuses that can occur — and I am talking about the reprehensible expulsion of Jewish lesbians from the recent Chicago Dyke March — I am still cheered by the broader social-justice agenda re-emerging in today’s LGBT activist movement.

And I am proud to have played a part in the early LGBT organization that embraced that same philosophy.

For over 45 years, John Knoebel made significant contributions to LGBT history, first as a pioneer gay activist in New York City from 1969-1976 and then during his 33-year career as a senior executive with The Advocate, OUT and other LGBT magazines from 1979-2012. Knoebel is currently writing a memoir of his lifelong involvement with LGBT politics and publishing.