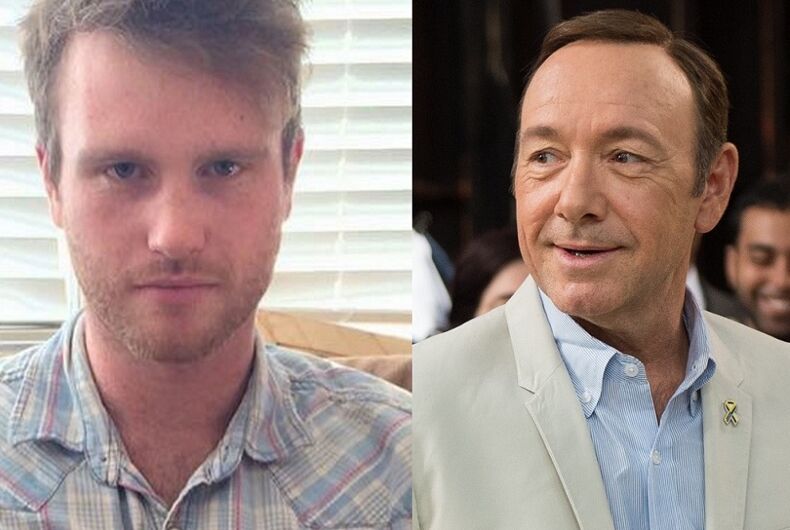 In an essay on Buzzfeed, Harry Dreyfuss, Richard Dreyfuss’s son, says that he was groped by Kevin Spacey when he was 18-years-old.

Harry wrote that he met Spacey in 2008 when his father was acting in a play at The Old Vic theater in London, where Spacey was the artistic director.

He wrote that he was a young straight man who enjoyed attention from older men he admired. “Instantly, my young-man-perpetually-seeking-father-figures heart melted,” Harry wrote. “All I remember thinking was you’re so nice.”

They met again a few days later at Spacey’s apartment to work on Richard’s lines. “I came along, excited to get to spend some time with my newest and most famous male authority figure,” he wrote.

Harry helped read one of the parts, and Spacey sat down next to him on the couch. After a few minutes, Spacey put his hand on Harry’s thigh. “Surely he can’t be coming on to me like this right in front of my dad,” he thought, but the hand stayed there.

He changed places, and Spacey followed him and put his hand on the teen’s thigh. He moved again, and this time he tried to block Spacey with his hand, but the man succeeded in putting his hand on Harry’s thigh. He then moved his hand to Harry’s genitalia, and Harry turned to him and shook his head “no.” But Spacey’s hand stayed there.

He wrote that he didn’t want to make a scene, since that could jeopardize his father’s job, make his dad punch Spacey, or hurt his own career in acting. So he sat silently.

When he told others the story, he tried to make it a joke, even when people told him that what Spacey did was wrong. He even spent an evening calming his father down, who was furious when Harry told him what happened years later.

Since numerous women have come forward with allegations against producer Harvey Weinstein and other men have told their stories about Spacey, he understands that this behavior shouldn’t be treated as normal.

“In retrospect, what disgusts me about Kevin was how safe he did feel. He knew he could fondle me in a room with my father and that I wouldn’t say a word. He knew I wouldn’t have had the guts. And I didn’t.”

Sexual predators who wield some power can surely feel the wind shifting, and hopefully they won’t feel so safe in the future.