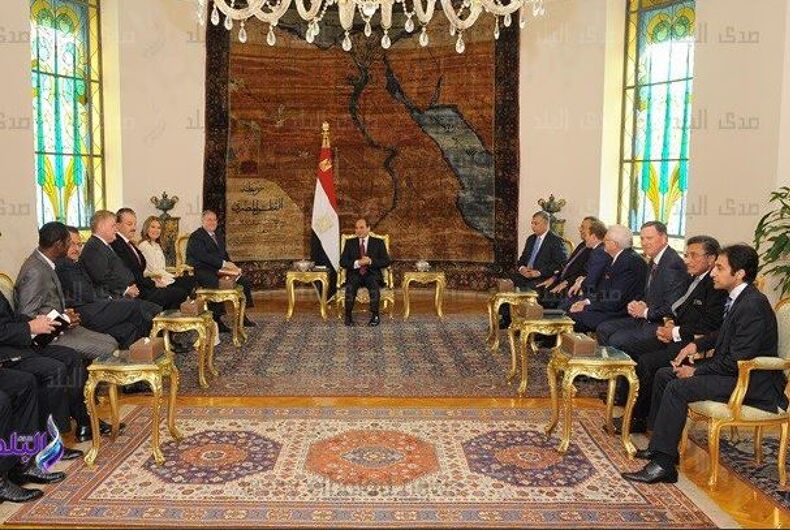 Former congresswoman Michele Bachmann and head of the Family Research Council (FRC) Tony Perkins were among a group of evangelicals to meet with Egyptian president Abdel Fattah el-Sisi, amid a growing LGBTQ crackdown.

The religious leaders said they were there to speak about the “plight of religious minorities” in the country. These same leaders are among those pushing for so-called “religious freedom” laws that would give a license to discriminate against LGBTQ people and others.

Attorney General Jeff Sessions recently appeased them by issuing “religious freedom” memos to help give cover to religious folks who wish to discriminate.

Vander Plaats is the CEO of The Family Leader, which is loosely affiliated with the anti-LGBTQ Focus on the Family. Boykin is the current executive vice president of the FRC, and was a vocal opponent against ending Don’t Ask, Don’t Tell.

Cru has a dangerous history of exporting anti-LGBTQ sentiment to Africa, where smears claiming LGBTQ people are pedophiles who want to come to Africa to steal children and turn them gay are peddled to anyone who will listen.

The el-Sisi government has been condemned as a dictatorship for its many civil rights abuses, including brutal and at times murderous suppression of protesters and political opponents.

It was for this reason that el-Sisi was not embraced by the Obama White House, but he is getting much better treatment from the Trump administration. Trump welcomed the president to the White House earlier this year.

While homosexuality is legal in Egypt, authorities are using so-called decency laws to arrest LGBTQ people. Recently, seven people were arrested just for holding up a pride flag at a concert. The situation is drawing comparisons to Chechnya, especially as both Egypt and Russia are threatening to disrupt the peace of the Olympics unless language against anti-gay discrimination is removed from a resolution.

“I appreciate the opportunity to meet with President el-Sisi to discuss the concerns we have as American evangelicals, for the plight of religious minorities in Egypt, especially those who are our brothers and sisters in Christ,” said Perkins.

Bachmann, who is on Trump’s evangelical advisory board, was recently named the “prayer leader” to the United Nations, through a program started by anti-LGBTQ preacher Jim Garlow.

The United States recently voted against a UN resolution to ban the death penalty for LGBTQ people.

The FRC has been named a hate group by the Southern Poverty Law Center for its anti-LGBTQ views and activism. President Donald Trump recently spoke at the group’s Values Voter Summit, making him the first president to do so.

I appreciate the opportunity to meet with President el-Sisi to discuss the concerns we have for the plight of religious minorities in Egypt. pic.twitter.com/toWQt2PF2R

Editor’s note: This article originally listed Moore as the CEO of The Family Leader, instead of Vander Plaats. It has been updated to correct the error.

Richard Dreyfuss’s son: Kevin Spacey fondled me in front of my dad