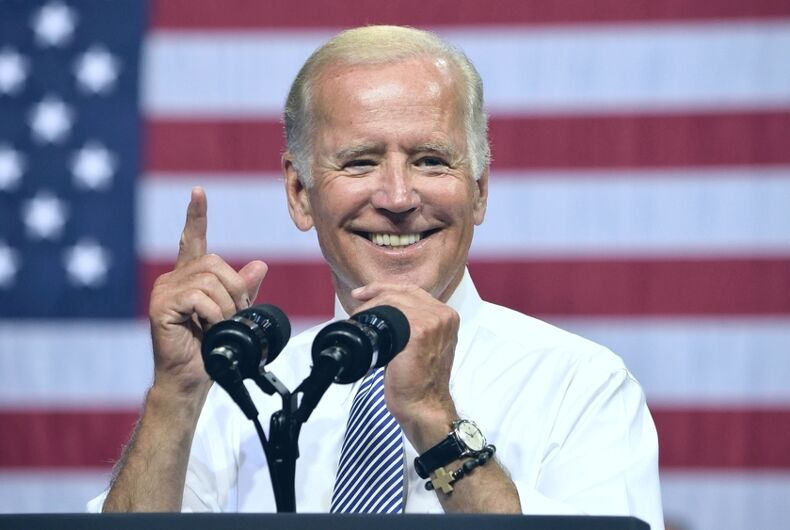 Yesterday, former Vice President Joe Biden announced Sen. Kamala Harris (D-CA) as his running mate in the 2020 presidential election, and Democrats recognized her as the first Black woman and the first Asian American to be on a major party’s presidential ticket.

But that’s not enough to satisfy gay former Trump administration official Richard Grenell, who accused Biden of homophobia for picking a straight running mate. Grenell’s confirmation has a history of trolling Twitter almost as extensive as his former boss’s.

Grenell served as the U.S. Ambassador to Germany under Donald Trump and for three months as acting director of national intelligence, making him the first out gay person to serve in a Cabinet-level position (even though it’s not a part of the Cabinet).

On Twitter, Grenell accused Biden of believing that “gays are security risks” because “no gays or lesbians even considered” for the position.

No gays or lesbians even considered. https://t.co/pqC5Y8A9ae

It’s a very specific accusation, and one that’s hard to believe considering how comfortable Biden appears to be among LGBTQ people. He pushed Barack Obama to support marriage equality, he has a 17-page comprehensive plan to advance LGBTQ equality as president, he leads Trump by 43 points in a recent poll on favorability among LGBTQ voters, he has officiated at least two same-sex weddings, he publicly supports bi visibility, he dropped by the Stonewall Inn to buy everyone drinks last year….

Biden’s also announced that a lesbian senior advisor would serve as Harris’s chief of staff yesterday.

Grenell’s accusation comes from a quote buried in a 1973 local newspaper article about comments made by then Sen. Biden at an event. Biden was asked if he supports letting gay people work for the U.S. Civil Service and the military, which was a contentious issue at the time.

“My gut reaction is that [gay people] are security risks but I must admit I haven’t given this much thought,” he said. “I’ll be darned!”

Grenell didn’t let go, though. He tweeted that Biden wanted “to make a demographic choice” by nominating a woman.

“Why not an Asian? Why snub the gays?” Grenell asked. Sen. Harris is both Black and Asian American and Sen. Tammy Duckworth (D-IL), who is also an Asian American, was reportedly on Biden’s shortlist for a running mate.

. @ericgarcetti says @JoeBiden told him he didn’t want to make a demographic choice but that’s not what Joe Biden said publicly. He said it would be a woman.

Why not an Asian?
Why snub the gays?

Grenell, of course, has not put the same pressure on Trump to nominate a gay running mate. Not only is Vice President Mike Pence staggeringly heterosexual, but his record is also a two-decade-long story of opposition to any measure that would help LGBTQ equality since he first ran for Congress in 2000 on a platform that included federal funds for conversion therapy. Pence’s wife works for a school that bans LGBTQ students, faculty, and staff.

Grenell does not appear to be generally concerned with getting gay candidates into the White House, either. In 2019, Grenell attacked out candidate Pete Buttigieg for criticizing Pence’s record on LGBTQ issues, calling Mayor Pete’s criticisms a “hate hoax” against Pence.

“One of the things that really bothers me about [Buttigieg’s] attack is that Mike Pence is a friend of mine,” Grenell said at the time. “Mike and Karen are great people. They are godly people. They’re followers of Christ. They don’t have hate in their heart for anyone.”