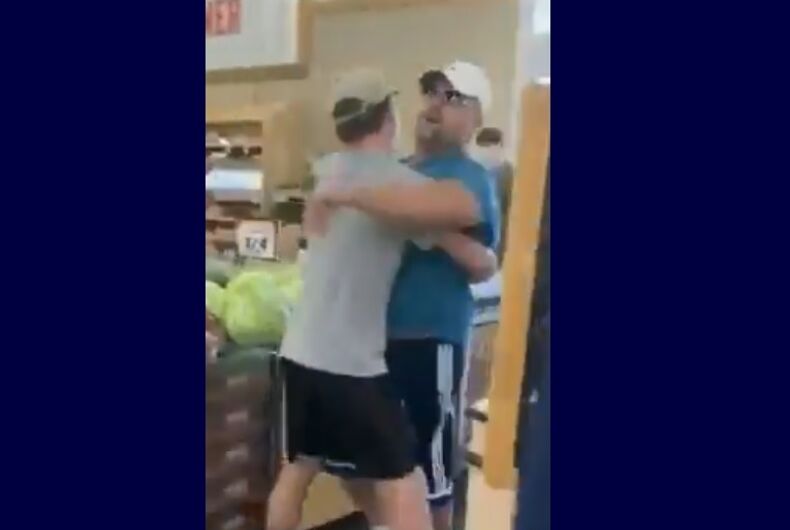 The man being restrained and carried by his son.Photo: Screenshot/Twitter

A video of a man accusing people of being “pussies” for wearing facemasks at a grocery store in Arizona has gone viral. The man was so unhinged he had to be carried out of the store by his adult son.

“Look at you fools, you’ve got a fuckin’ doily on your face, retards. You look like you fuckin’ got it off your mother’s countertop,” the man shouts in the video, implying that it’s not masculine to prevent the spread of coronavirus.

TMZ reports that the video, which has been viewed almost six million times on Twitter, was recorded at a Sprouts grocery store in Tuscon.

The white man is already shouting at people at the beginning of the video while his adult son tries to calm him down. Neither the man nor the son are wearing masks.

“These people won’t learn,” the man says. “You’re a bunch of idiots wearing masks, you know it’s not real.”

A customer shouts “Fuck you, asshole” back at the man and calls him a “child,” so the man responds, “You look like an idiot, you’re the child.”

“You’re a dork. Look at you, you giant fucking dork…. Come outside, come outside and show me how tough you are.”

“I’ll beat that fuckin’ mask off your face, a fucking retard,” he threatened as his son physically picked him up and carried him out of the store.

Anti-masker in Tucson, AZ throws a tantrum and has to be carried out by his own son pic.twitter.com/ggo4I968aL

The Centers for Disease Control and Prevention (CDC) Director Dr. Robert R. Redfield examined the science in an editorial for the Journal of the American Medical Association (JAMA) and concluded: “Cloth face coverings are one of the most powerful weapons we have to slow and stop the spread of the virus – particularly when used universally within a community setting.”

But many Americans refuse to wear them, especially men. A Gallup poll in July found that only 34% of men said that they “always” wear a mask outside their home, compared to 54% of women. Twenty percent of men said they “never” wear masks, more than double the 8% of women who said the same.

An earlier study from Middlesex University and the Mathematical Science Research Institute in Berkeley found that men were more likely than women to believe that masks are “shameful, not cool, a sign of weakness and a stigma.”

While many Americans of all genders wear masks in public, the man in the video appears to strongly associate wearing facemasks with being emasculated, comparing them to “doilies” and calling people who wear them “pussies.”

Republicans are trying to decide whether Kamala Harris is “legally” Black