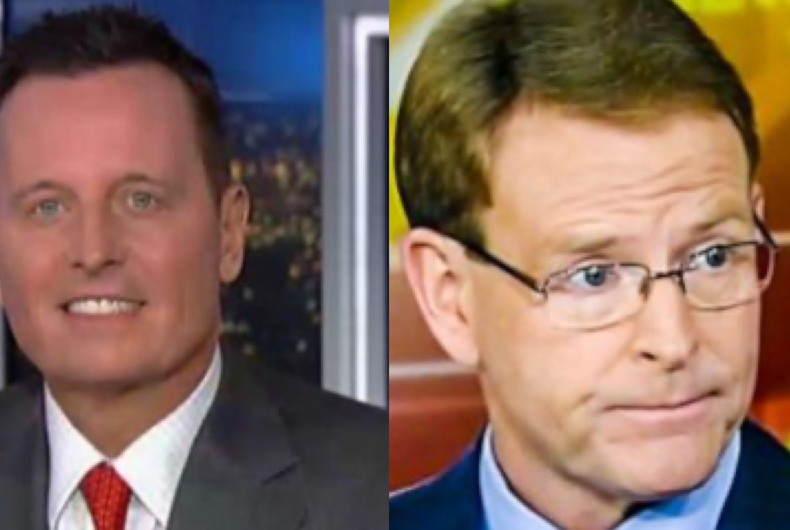 Richard Grenell was appointed as the acting Director of National Intelligence, a Cabinet-level position that supervises all 17 agencies within the United States government with covert or intelligence operations. He is the first out person to serve in a Presidential administration’s cabinet.

Despite Grenell’s avid work promoting the agenda of Donald Trump and defending right-wing figures such as Mike Pence from claims of homophobia and bigotry over the years, conservatives are criticizing Trump’s choice. One group told a right-wing publication that he’s unfit for the position because he’s ‘a gay activist first and a loyal Republican second.’

Grenell has been the government’s highest-serving LGBTQ person since 2018, when he began serving as the Ambassador to Germany. “Rick has represented our Country exceedingly well and I look forward to working with him,” Trump tweeted about Grenell this week in announcing his appointment.

Despite Trump’s ringing endorsement, his fellow far-right allies and supporters are not so happy about the announcement. They expressed concerns, mostly due to Grenell’s drive to decriminalize homosexuality in the 70 countries around the world. This did not include Germany, the actual country he was appointed to serve, and only one country (Botswana) has ended its ban on homosexuality during his time – while countries such as Gabon and Uganda have tried to further criminalize it.

Tony Perkins, the head of the anti-LGBT hate group Family Research Council (both of whom we’ve catalogued several times at LGBTQ Nation), released a statement slamming the President’s latest appointee.

“There is concern among our pro-family allies around the world that Ambassador Grenell will engage in LGBT activism as Acting Director,” Perkins wrote in a statement. While supposedly ‘denouncing’ countries where homosexuality can result in the death penalty, Perkins also claimed “that does not mean we should engage in ‘cultural imperialism’ by imposing policies that were imposed upon us by our own Supreme Court on other countries with different cultures, traditions, and values.”

“Let’s find common ground in calling for an end to all forms of physical violence against homosexuals — but let’s refrain from imposing the values of the sexual revolution on the rest of the world,” the far-right conservative wrote. He also defines marriage equality several times as something “imposed” on the country “by an activist Supreme Court”, as opposed to the law of the land.

While right-wing figures outside the United States are often supportive of gay rights, Grenell’s ‘activism’ makes him wildly unpopular among his own with the evangelical-influenced conservatives here in America.

Doug Mainwaring, a journalist for LifeSiteNews, wrote that Grenell is “an interesting hybrid” as “a self-described gay Christian” because he activist for both pro-life, traditional conservative positions and gay rights. Mainwaring asserts that while Grenell’s role in the administration was “limited” to ending criminalization of homosexuality, he “perhaps admitted that he might be seeking more” and he will continue to do that in his new position.

Founder and President of the anti-LGBTQ ‘Americans for Truth about Homosexuality’, Peter LaBarbera, told the publication that Grenell “has proven in his work…that he is a gay activist first and a loyal Republican second.”

“As an open and proud homosexual, [h]e bills himself as an evangelical Christian. This only confuses the Gospel and undermines true, biblical Christianity,” LaBarbera concluded.

At the same time, Mainwaring champions Grenell for previously being ‘an ultra right-wing sniper on social media,’ which he says is “a moniker that could also be applied to the president.”

Besides conservatives struggling to choose between discrediting Grenell for his pro-LGBTQ agenda and praising his pro-Trump work, LGBTQ people are also concerned about the new Director. Grenell has previously claimed that Presidential candidate Pete Buttigieg was creating a “hate hoax along the lines of Jussie Smollett” for pointing out that Vice President Pence was anti-LGBTQ. He also was subject to complaints from the German government. “He does appear to need some tutoring,” one German leader wrote, while other government officials “complained about Grenell’s aggressive style.”

Grenell was also made to apologize for his years of misogynist insults prior to his appointment as Ambassador.

Charlotte Clymer of the Human Rights Campaign previously said of Grenell’s campaign to decriminalize homosexuality was not up to par. “It would be different if they were trying, but it’s not even clear they are doing anything meaningful at all.”

The Harlem Renaissance was as Queer as it was Black