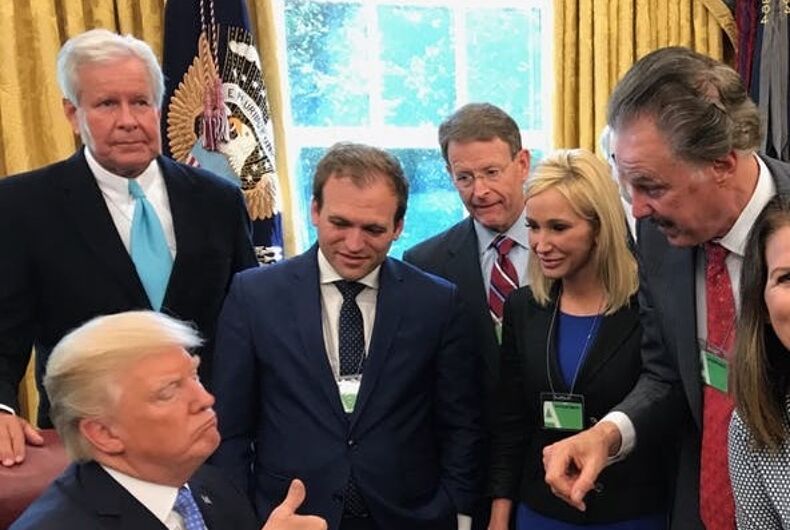 The Trump administration held a panel on its efforts to decriminalize homosexuality around the world, but one panelist is getting attention for his anti-LGBTQ history.

The U.S. Mission to the U.N. held a side event alongside a meeting of the U.N. Security Council last week entitled “Decriminalizing Homosexuality in Solidarity with LGBTQ People.”

Related: The State Department is holding a summit on the religious right’s agenda

The event was a panel discussion intended to highlight the Trump administration’s goal of decriminalizing homosexuality in the around 70 countries that ban it. At the meeting, which was attended by U.S. Ambassador to the U.N. Kelly Knight Craft and out U.S. Ambassador to Germany Richard Grenell, the names of the countries that ban homosexuality were read.

But the Trump administration’s message was undermined by the presence of Johnnie Moore – a member of the U.S. Commission for International Religious Freedom and the founder of the public relations firm Kairos Company – who has a history of anti-LGBTQ statements and actions.

In 2008, Moore wrote a column for the far-right site OneNewsNow with the title “Hey, Let’s Make Middle School Lesbians!” where he decried the Katy Perry song “I Kissed A Girl,” arguing that the song was a sign that “media moguls” were trying to “alter the healthy development of our nation’s kids.”

“We are facing the rise of the most homosexually friendly generation in history,” Moore wrote. “Homosexual experimentation is also an epidemic. This is the fruit of years of marketing that has literally altered the worldviews of our nation’s 80 million millennials.”

According to GLAAD, Moore signed a letter asking Congress to step in and force D.C. to stop issuing marriage licenses to same-sex couples.

Moore recently, he proudly participated in an evangelical panel that claimed they advised Donald Trump to issue his transgender military ban. Moore was so proud that he even provided a photo to the press where he is standing over Trump’s left shoulder, smiling.

Moore serves on the U.S. Commission for International Religious Freedom – an advisory panel that reports to the Secretary of State and the White House – alongside anti-LGBTQ hate group leader Tony Perkins and Nadine Maenza, the executive director of Rick Santorum’s PAC.

At the U.N. last week, Moore was willing to criticize non-U.S. countries that ban homosexuality, even though he does not support broader LGBTQ equality.

He said, “We need religious leaders to stand up and say, ‘This is not only a bad law that needs to be changed, but it is in defiance of the human dignity of an individual.'”

OutRight Action International Executive Director Jessica Stern attended the event, and she criticized the Trump administration for focusing on sodomy laws while ignoring other forms of discrimination and violence against LGBTQ people.

“The decriminalization of same-sex relations is crucial, but it is just the tip of the iceberg,” she said in a statement. “There isn’t a single country in the world in which LGBTIQ people don’t face discrimination or violence, purely for who we love or our gender identity. Instead of focusing only on decriminalization; we need to promote acceptance, understanding, and equality for all LGBTIQ people everywhere.”