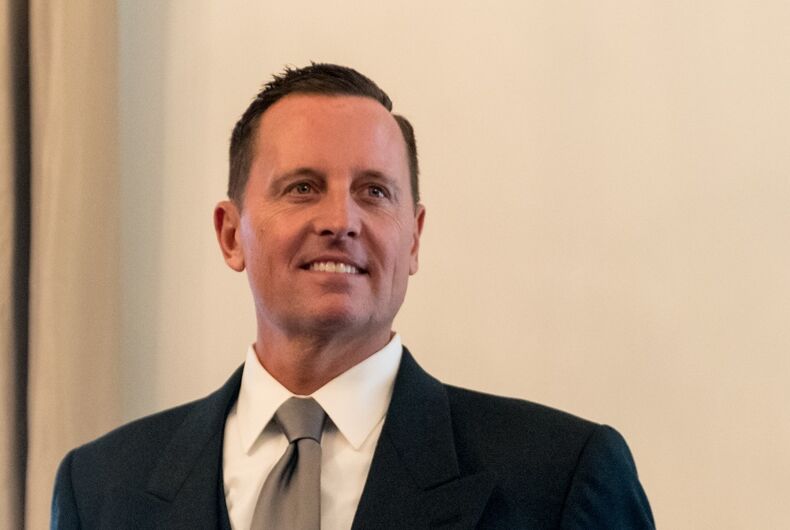 Richard Grenell, the current U.S. Ambassador to Germany, has been appointed to be the acting Director of National Intelligence (DNI), making him the first out gay person to occupy a cabinet-level position.

In announcing his appointment, Trump said that Grenell was “highly respected” and that he represented the U.S. “exceedingly well.” Grenell has a reputation of being extremely loyal to Trump.

….for the wonderful job he has done, and we look forward to working with him closely, perhaps in another capacity within the Administration!

Before being appointed to his ambassadorship, Grenell was perhaps best known as a rightwing internet troll. During his confirmation hearing, Senators Jeff Merkley (D-OR) and Ben Menendez (D-NJ) read some of his tweets to the Senate where he insulted Rachel Maddow’s, Michelle Obama’s, and other prominent women’s looks.

Grenell responded that it was “certainly never my intention to hurt anyone’s feelings.”

After he was appointed, German leaders expressed disappointment.

“It’s not my task to teach people about the fine art of diplomacy, especially not the U.S. ambassador,” said Andrea Nahles, leader of Germany’s mainstream Social Democratic Party. “But he does appear to need some tutoring.”

He made a name for himself with his combative style and public debates with European leaders on Twitter. For example, just this week he publicly called out German leaders for making “dangerous mistakes” by holding private conversations with diplomats, something he called “swampy.”

One by one, day by day, @realDonaldTrump is taking steps to destroy America’s fact-based institutions, at the same time he eviscerates rule of law. Appointing as @ODNIgov @RichardGrenell, who has politicized every issue he has touched & has contempt for facts, would be a travesty

Grenell is gay and his appointment is an LGBTQ first. But his LGBTQ advocacy has been lackluster.

In 2019, when Pete Buttigieg said that Mike Pence is homophobic, Grenell accused Buttigieg of making up a “hate hoax along the lines of Jussie Smollett.”

“Mike and Karen [Pence] are great people,” Grenell said at the time. “They are godly people. They’re followers of Christ. They don’t have hate in their heart for anyone.”

Perhaps Grenell’s best-known initiative as U.S. Ambassador to Germany had nothing to do with Germany at all: he claims he worked with Donald Trump on a campaign to end the criminalization of homosexuality around the world (Germany legalized homosexuality in the 1960s).

While the campaign hasn’t produced any notable results – Gabon banned homosexuality last year – it has been touted by the right as a sign that Trump isn’t completely anti-LGBTQ, even if he forgets it exists every now and then.

The Log Cabin Republicans tweeted that they are “excited” by the appointment and assured their followers that Grenell is “totally qualified.”

The LGBTQ Republican organization incorrectly stated that Grenell is a “Cabinet member,” a designation reserved for the vice president and the heads of the executive departments. The Director of National Intelligence is a Cabinet-level official and is not in the presidential line of succession.

Grenell was appointed to the position after Joseph Maguire, the previous acting DNI, stepped down. In September, Maguire initially refused but then later agreed to testify before the House Intelligence Committee related to allegations that he was unlawfully withholding a whistleblower complaint related to the Trump-Ukraine election intelligence scandal.

In his statement announcing that he would step down, Maguire only said that he was leaving to return to his previous role as Director of the National Counterterrorism Center.

The problem with Michael Bloomberg isn’t what you think