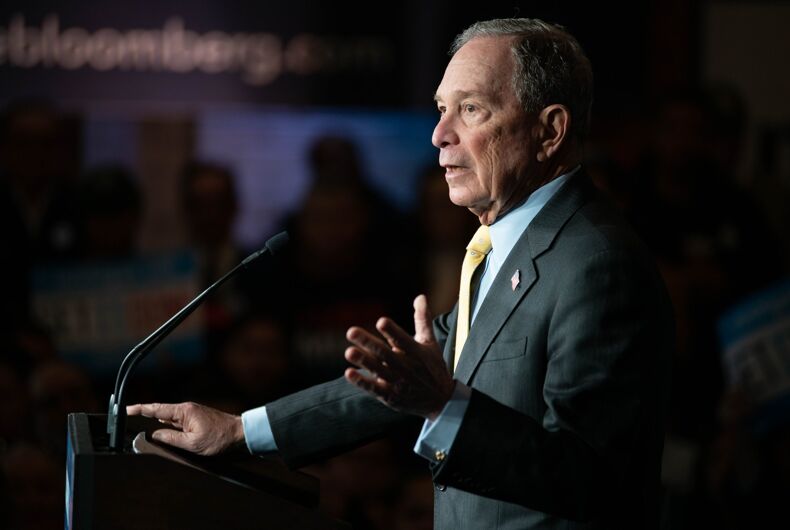 Sen. Elizabeth Warren (D-MA) blasted Mike Bloomberg for anti-LGBTQ and misogynist comments he allegedly made, including referring to a woman as a “horse-faced lesbian.”

During the Democratic presidential primary debate in Nevada last night, the former Republican mayor of New York City said that the U.S. “can’t stand” another four years of Donald Trump as president, and that set Warren off.

Related: Mike Bloomberg said trans rights are about “some man wearing a dress” using a locker room with girls

“I’d like to tell you about who we’re running against: a billionaire who calls women ‘fat broads’ and ‘horse-faced lesbians,'” she said. “And, no, I’m not talking about Donald Trump. I’m talking about Mayor Bloomberg.”

“Democrats are not going to win if we have a nominee who has a history of hiding his tax returns, of harassing women, and of supporting racist policies like redlining and stop and frisk,” Warren continued, warning Democrats not to “substitute one arrogant billionaire for another.”

Here's that early Warren haymaker. "I'd like to talk about who we're running against, a billionaire who calls women fat broads and horse faced lesbians. I'm not talking about Donald Trump. I'm talking about Mayor Bloomberg." pic.twitter.com/AS9XVbTthz

She was referring to a booklet written in 1990 by Elisabeth DeMarse for his 48th birthday. DeMarse is a former chief marketing officer for Bloomberg L.P., the financial software company co-founded by Mike Bloomberg.

“Yes, these are all actual quotes,” DeMarse wrote in the 34-page booklet’s introduction. “No, nothing has been embellished or exaggerated. And yes, some things were too outrageous to include.”

The alleged quotes are largely obscene or betray a deep callousness for the people who worked for him. In one of the alleged quotes, he referred to someone as a “womanizing fag.”

“The royal family. What a bunch of misfits. A gay, an architect, that horse-faced lesbian, and a kid who gave up [actress] Koo Stark for some fat broad,” Bloomberg allegedly said. Stark dated Prince Andrew in the early 1980s and he later married Sarah Ferguson.

Bloomberg also allegedly said that his computer program will “do everything, including give you a blow job.” Another quote, though, decries computers because they “would say that the sex of the person giving you a blow job doesn’t matter.”

And a lot of them are about women. “If women wanted to be appreciated for their brains, they’d go to the library instead of to Bloomingdale’s,” the booklet says he said.

In 2001, when he was running for mayor, a spokesperson for Bloomberg said that “some of the things he might have said” but that Bloomberg apologized to “anyone that was offended,” adding that they were just “jokes.”

In a 2020 statement, his presidential campaign said: “Mike simply did not say the things somebody wrote in this gag gift, which has been circulating for 30 years and has been quoted in every previous election Mike has been in.”

During the debate, Warren again attacked Bloomberg, saying that his history of misogyny makes him a bad candidate for the general election, especially since women who have accused him of various things and who have signed non-disclosure agreements may end up talking to the Trump campaign.

“We are not going to beat Donald Trump with a man who has who knows how many nondisclosure agreements and the drip, drip, drip of stories of women saying they have been harassed and discriminated against,” she said. “That’s not what we do as Democrats.”

Bloomberg responded that he has never been accused of anything, but that some women “didn’t like a joke I told.”