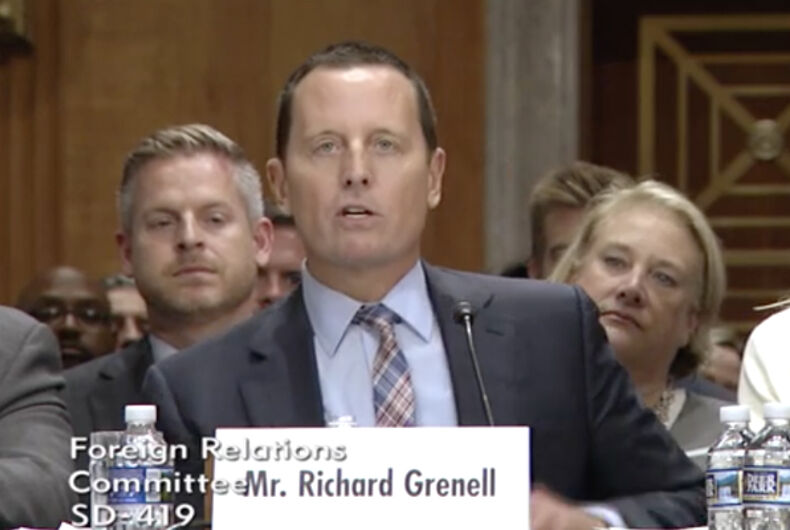 Richard Grenell’s appointment as ambassador to Germany occasioned a lot of attention because Grenell is gay.

When Grenell was tapped to serve as a national security spokesman for Mitt Romney during his 2012 presidential campaign, the religious right rose up en masse to block Grenell. But blessed by President Trump, there was nary a peep this time around. In fact, Mike Pence swore him in.

In case you think that means Grenell is ushering in a new era of moderation, think again. In an interview with far-right Breitbart News, Grenell comes across not as a diplomat but as a cheerleader for the rising ultra-nationalist movement in Europe.

“There are a lot of conservatives throughout Europe who have contacted me to say they are feeling there is a resurgence going on,” Grenell said.

“I absolutely want to empower other conservatives throughout Europe, other leaders. I think there is a groundswell of conservative policies that are taking hold because of the failed policies of the left.”

During his confirmation hearings, Grenell said that he was “a big Merkel fan.” But the Breitbart interview shows that his fandom is easily transfered. He praised the leader of Austria’s conservative party for his position on restricting immigrants.

Kurz’s party has a lot of similarities to the current Republican party. Among them is its opposition to marriage equality, although it finally bowed to the inevitable after a court ruling last year.

More telling, perhaps, was Kurz’s decision to attend a March for Jesus rally in 2016, held the same day as a popular pride march. None of this apparently bothers Grenell.

Grenell’s interview with Breitbart–which never mentioned that he was gay–hasn’t won him any fans in the U.S. either. Sen. Chris Murphy (D-CT) was clearly irritated by Grenell’s comments.

When I raised concerns to Grenell about politicizing this post, he personally assured me that once he became Ambassador he would stay out of politics. This interview is awful – Ambassadors aren't supposed to "empower" any political party overseas. https://t.co/i8oOhqEk5k

But, his title notwithstanding, Grenell clearly has little interest in diplomacy. Like other successful Trump appointees, he knows there’s only one person that matters.

He proves that as long as your willing to wreck international relationships and break norms, being gay is no barrier in the Trump administration.

Facebook killed their Pride reaction, but they added this instead

That narrow Supreme Court decision may not stay narrow for long