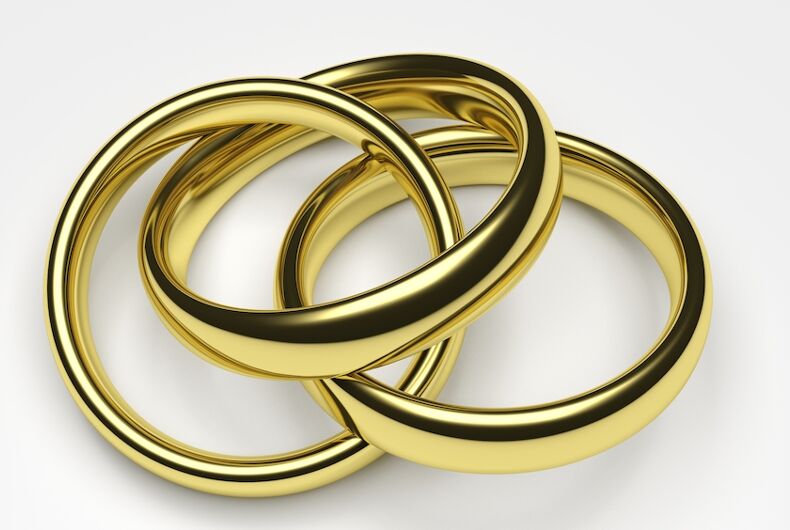 Of all the issues facing Utah, the state senate has decided the one that really merits its attention is polygamy. Or, more specifically, the need to legalize polygamy.

This week, the Utah state senate voted unanimously to remove the threat of jail time for ‘anyone’ engaged in polygamy (in this context, polygamy is entirely about men having multiple wives.) The argument for the bill was that it would allow people to report abuses, like underage wives.

Needless to say, the right wing sees it all as a gay plot.

“Gay marriage was always leading to polygamy,” The Federalist, a conservative magazine, declared. “The reason polygamy became inevitable is that once untethered from the concept of man and wife, there is simply no basis for constraining marriage to two people,” the magazine argued.

The Federalist is hardly a paragon of high moral principles. When Roy Moore was running for Senate in 2017, the publication ran an article defending his creepy interest in teenage women by saying it was “not without some merit if one wants to raise a large family.” In a fit of amnesia, it also quickly discarded its anti-Trump philosophy once Trump became president.

Setting aside its questionable leap in logic, the magazine’s take on polygamy is echoing what Supreme Court Chief Justice John Roberts predicted when the court legalized marriage equality.

“[F]rom the standpoint of history and tradition, a leap from opposite-sex marriage to same-sex marriage is much greater than one from a two-person union to plural unions, which have deep roots in some cultures around the world,” Roberts said in his dissent in 2015.

The idea that Utah would be a hotbed of licentious sexual arrangements seems pretty ludicrous, even though the Church of Latter Day Saints has a long and complicated relationship with polygamy. For more than the first fifty years of its existing, the church made polygamy a tenet, only abandoning it when it threatened Utah’s bid for statehood.

However, various offshoots of the church continue to promote plural marriages, despite LDS leadership’s renouncement of the practice – but Utah law enforcement generally turns a blind eye as long as the men are considered otherwise “law-abiding.” Removing polygamy from the books as a felony is more a recognition of reality than a revolution.

That doesn’t stop the right from continuing to see marriage equality as the slippery slope to hell. Legally, the arguments makes no sense. There’s a big difference between being denied the right to marry at all to wanting to expand it to include multiple partners. And it’s not as if there’s been the explosion in polygamy, bestiality, incestuous relationships or people marrying computers that opponents of marriage equality foretold.

The complaints from the right do expose one little noticed issue: the right doesn’t always consider Mormons to be part of the mainstream right. Of course, just to prove the criticism wrong, the Utah state house passed another bill the same day as the state senate advanced its polygamy measure.

That bill would require any “hardcore” (which is not defined) pornography to carry a warning that it would harm minors or face a $2,500 fine. The state considers pornography a health risk. Older men with multiple younger wives, not so much.

***Editor’s Note: This article title previously implied that polygamy could be ‘legalized’, which is different from decriminalization.

Bernie Sanders is projected to win Nevada. Pete Buttigieg appears to be his closest competitor.