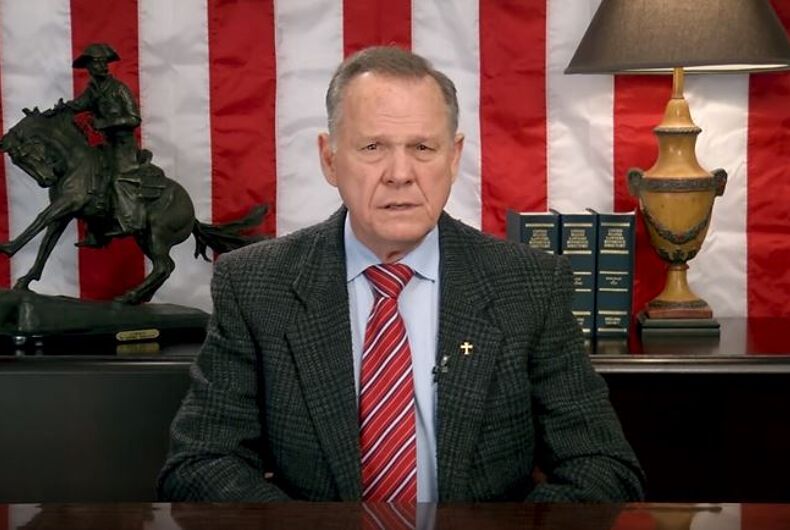 Moore said he is waiting for the final vote count, despite election officials saying it is unlikely Jones will not be declared the winner.

But the main thrust of his video is to condemn the current state of America, claiming that we are “in a struggle to preserve our republic, our civilization, and our religion, and to set free a suffering humanity.”

Moore has been accused by multiple women of sexual assault, many claiming the incidents happened while they were teenagers, all of which he denies. Still, he feels fully justified casting stones against America, while sitting before the flag.

“Today, we no longer recognize the universal truth that God is the author of our life and liberty,” he said. “Abortion, sodomy and materialism have taken the place of life, liberty, and the pursuit of happiness.”

He then, without a hint of irony, quoted Abraham Lincoln, despite recently claiming that America was really great during the age of slavery.

“We have stopped prayer in our schools,” Moore added. “We have killed over 60 million of our unborn children. We have redefined marriage and destroyed the basis of family, which is the building block of our country.”

“We have even begun to recognize the right of a man to claim to be a woman, and vice versa,” he said.

And Alabama recognized its right not to elect a probable child rapist, and definite homophobe, transphobe, racist garbage person. Now deal with it, and be gone.

If you want to watch Moore’s crazy ass, you’ll find it below.