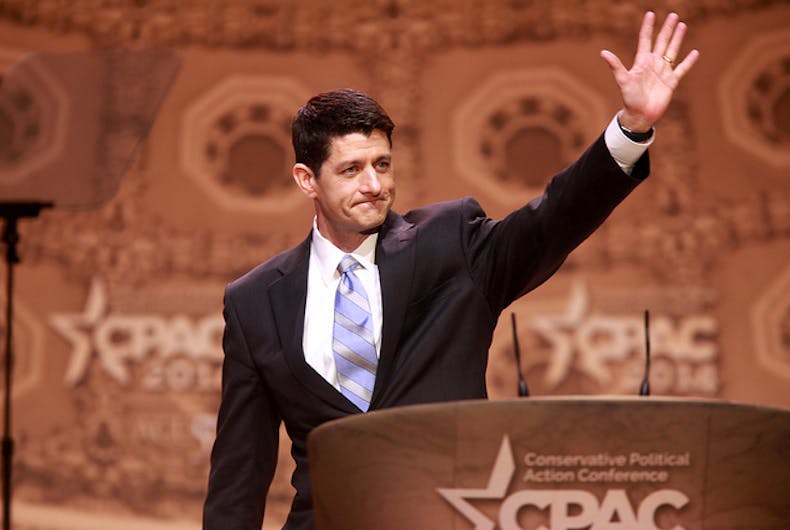 Speaker of the House Paul Ryan appears to be eyeing the exit, unhappy with his job, and ready to get out of politics.

Speaking with numerous people who know Ryan, in a number of different contexts, Politico reports that they all have arrived at the same conclusion:

Despite several landmark legislative wins this year, and a better-than-expected relationship with President Donald Trump, Ryan has made it known to some of his closest confidants that this will be his final term as speaker. He consults a small crew of family, friends and staff for career advice, and is always cautious not to telegraph his political maneuvers. But the expectation of his impending departure has escaped the hushed confines of Ryan’s inner circle and permeated the upper-most echelons of the GOP. In recent interviews with three dozen people who know the speaker—fellow lawmakers, congressional and administration aides, conservative intellectuals and Republican lobbyists—not a single person believed Ryan will stay in Congress past 2018.

He has made clear that he took the job practically under duress, as his final political job, and with no intention of sticking around for the long haul. He told his predecessor John Boehner as much.

Boehner was also anxious to leave the job behind, and a recent Politico feature notes that he is fond of laughing at problems in D.C. with the response, “Not my problem.”

In yet another Politico piece, back in the fall, Ryan flat out said, when asked if he worried about job security, that “it’s not a job I ever wanted in the first place.”

The kicker? How he sees his colleagues.

Friends of his told the publication that “friends say he feels like he’s running a daycare center.”

I dare say, Paul Ryan has never been so relatable.

The entire article, lengthy as it may be, is worth your time, offering a fascinating insight into Ryan’s thought process as he continues to try to lead an increasingly unwieldy Republican party and base.